You might belong in Hufflepuff, Where they are just and loyal, Thosepatient Hufflepuffs are true, And unafraid of toil

SLURL to the faire

As I said I'm a Hufflepuff so, for this post I am showing off a host of Hufflepuff items for my fellow Badgers! And I am in the Hufflepuff commons in the Mischief Managed sims. 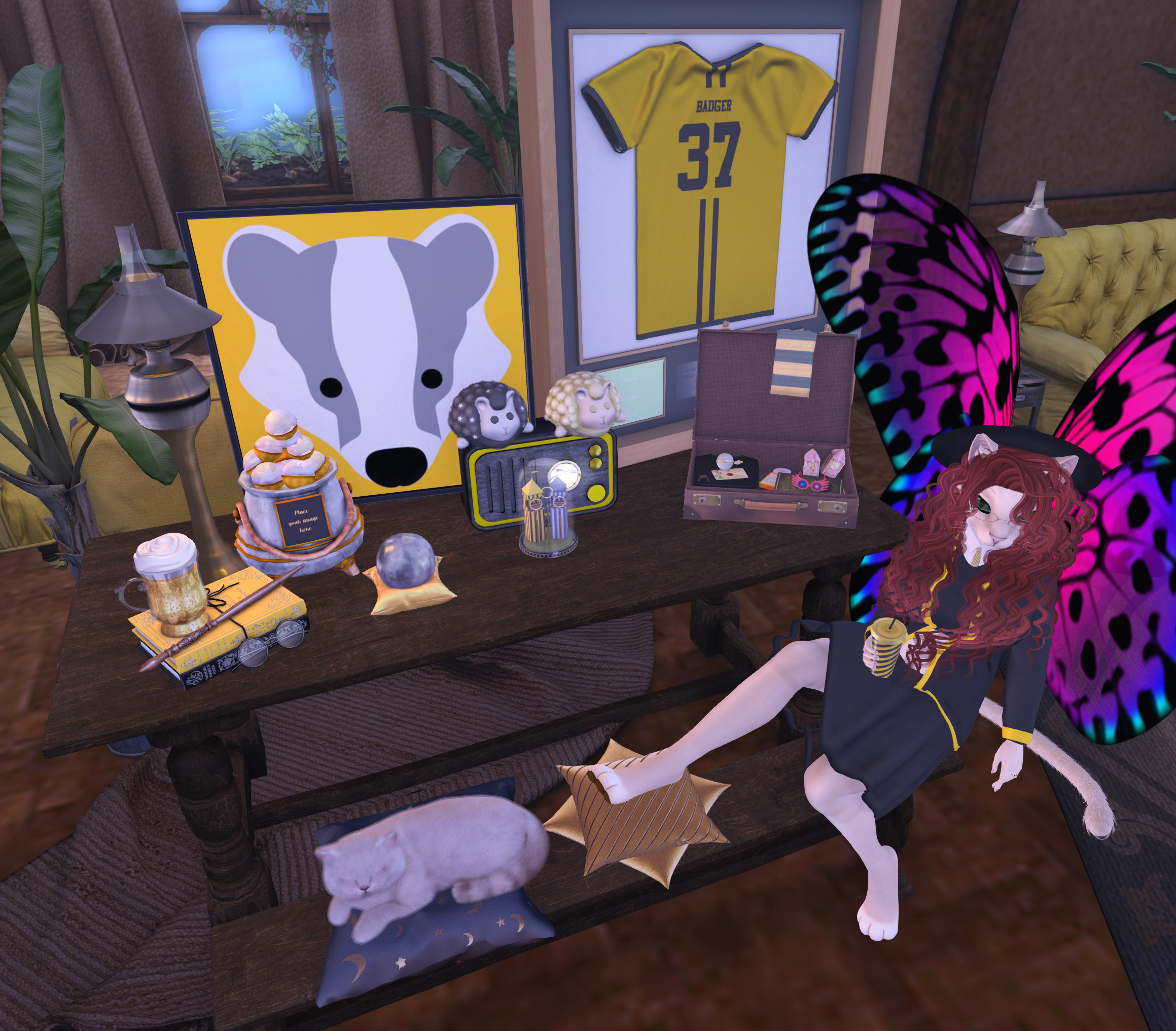 
For the items in the photos! From the faire I am wearing Nishi 2020 Uniform. This was a Hogwarts uniform created by an rper with the rp in mind! Its fantastic and comes with a range of ways to style it and of course also has all the houses.

In my hand is the Hufflepuff version of HopScotch's Wixen Drink Gacha. For those that do not know Wixen is the accepted genderless version of Witch or Wizard. At lest accepted in Mischief Managed.

And under my foot is Raindale's - Sparrownest cushions double 2 resized down and set to Huffle colors.

Now lets get to all the fun stuff on display!

Starting with the two frames. On the Left is UnKindness's Poppin Prints with the badger. It comes with all four house mascots linked together but I separated out just the badger. On the right is Cheeky Pea's Framed Shirt Yellow which is a quidditch shirt for the Hufflepuff house. The bottom has two areas you can customize with photos and you can change the number and switch between no text badger and "sporty person" for the text. AND if you buy the fat pack of all the houses you can customize it even more!


On the left in front of the badger painting are the following items from left to right Granola. Harry's Buttery Beer Dispenser - Black/Yellow. This is a drink giver as well as a decor items!! Then in the middle we have comet. + gacha machine + {Badgers} This can both be used as a Gacha machine *script not provided, at least not in the blogger pack* or just decor! and then on the right is .TeaBunny. Gazing Orb. The pillow's color can be changed and there is a slight animation to the orb itself. You can see a close up of these three items here

In the middle we have three items. The critters are stuffed animals by Noxturnal and they are out of her Pygmy puff Stuffy Gacha. They are sitting on top of Violetility's Wizarding Radio in Badger. And in front of them is a cute lil bell jar with Quidditch stadum towers by Elm called the Wizarding Sports Dome . Then on the right the suit case is by Junk Food and is called House Case. It comes with everything inside the case! You can see a close up of these items here

And the very last item is the Kitty! It is Foxwoods floofy Kitty in light. EVERY so often it opens its eyes up and its just darling! Close up of it is here

One more week and a few for the faire. Get yourself down to it and grab some nice things!

Posted by Softpaw Sommer at 6:24 PM