A weekend of Hope 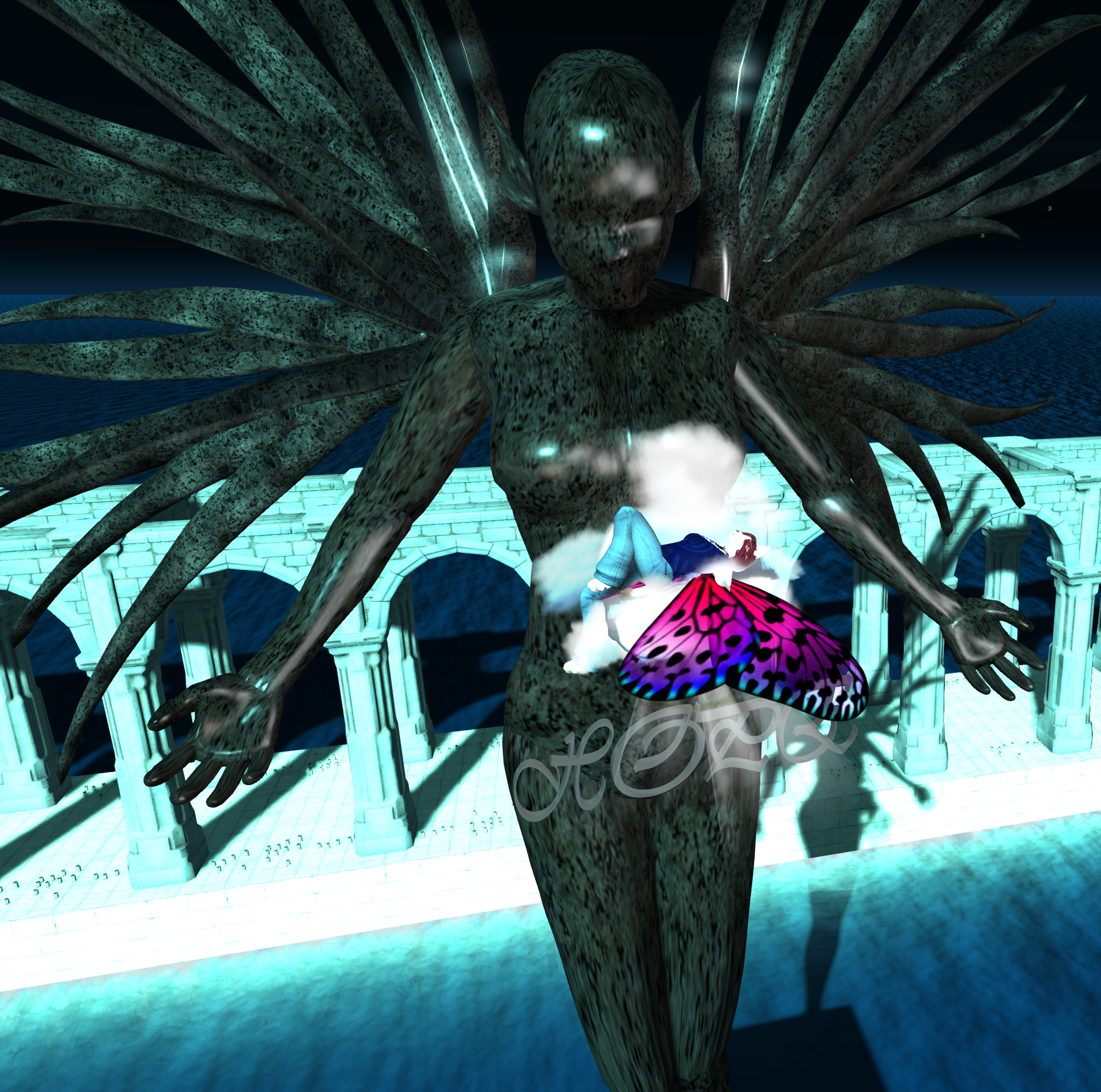 I’ve heard it in the chillest land -
And on the strangest Sea -
Yet - never - in Extremity,
It asked a crumb - of me.


Relay weekend has come and gone, seems like both it happened in a flash and also took forever. So much money raised and even more Hope. Hope that in the Future we wont HAVE to Relay as a cure has been found for Cancer.

And so now that it is over the sims are coming down in a few hours. I managed to get to all but three of the campsites after relay before they where removed by their teams. Some fantastic builds this year. I've got all my photos at the following links

http://www.softpaw.org/LJimages/SL/RFLSL2015pre photos taken before Relay weekend. I got one shot at least of each of the camps

http://www.softpaw.org/LJimages/SL/RFLSL2015 photos taken during Relay, lots of shenanigans with other people and shots of some of the fun avatars that run the track. What other Relay can you run the track with Dinosaurs, rabbits, unicorns, dragons, Timelords, werewoves and other assorted people?

http://www.softpaw.org/LJimages/SL/RFLSL2015post Photos taken after Relay. I went into more of the camps and explored their builds. plus some post Relay fun like the sim flood party.

http://www.softpaw.org/LJimages/SL/RFLSL2015Steelhead And these are just the shots I took of and at the Steelhead Campsite, they are all one of the above links but I pulled them out special because Steelhead is special.


I've put a few select favorite ones on my flikr page *link*, and will be slowly adding them to groups over the next few weeks. Some of my groups have limits.

And below are my three favorites . But I do recommend looking at the above links to realize just how AMAZING Relay for Life of Secondlife really IS.


This Dragon crossed two sims and was simply amazing 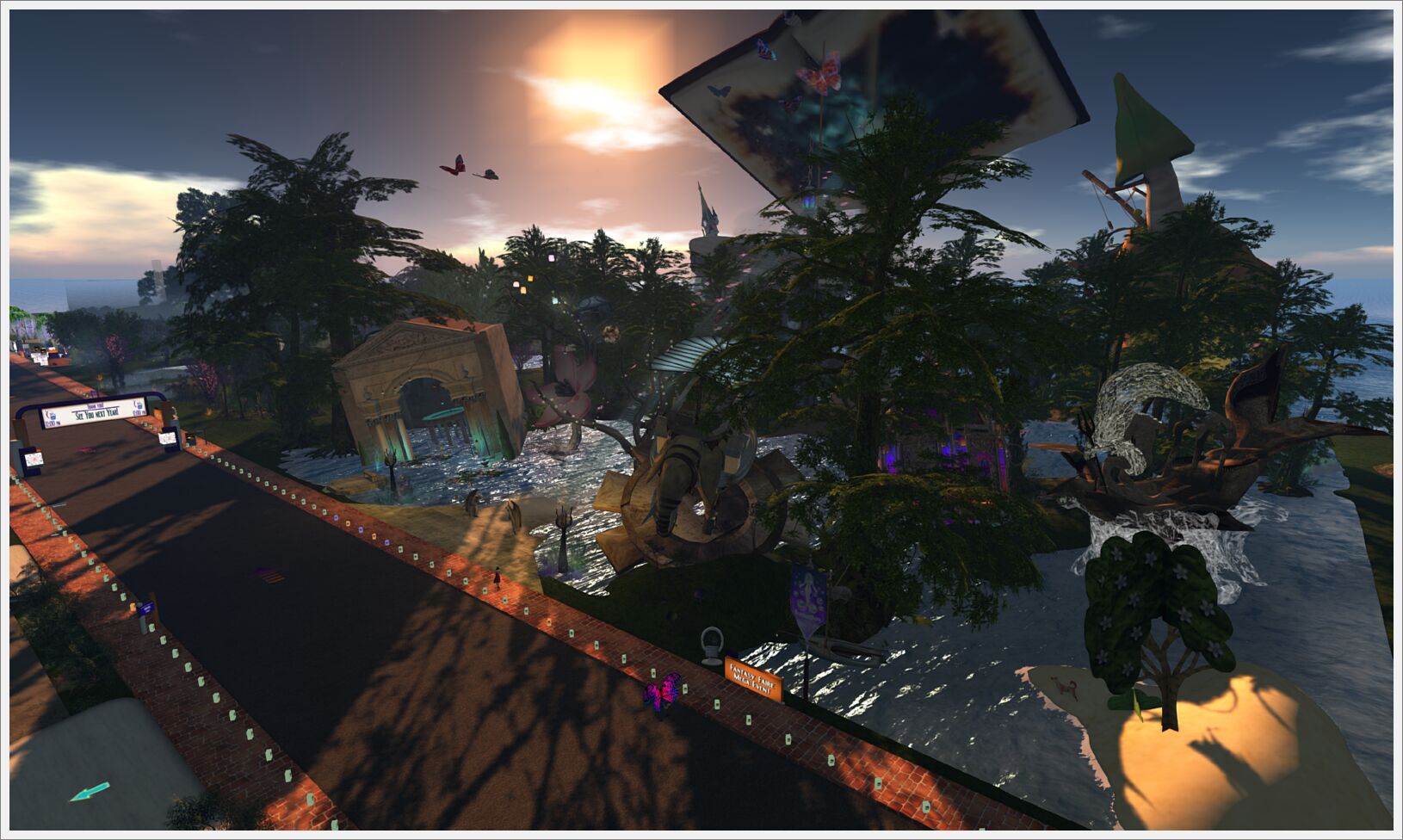 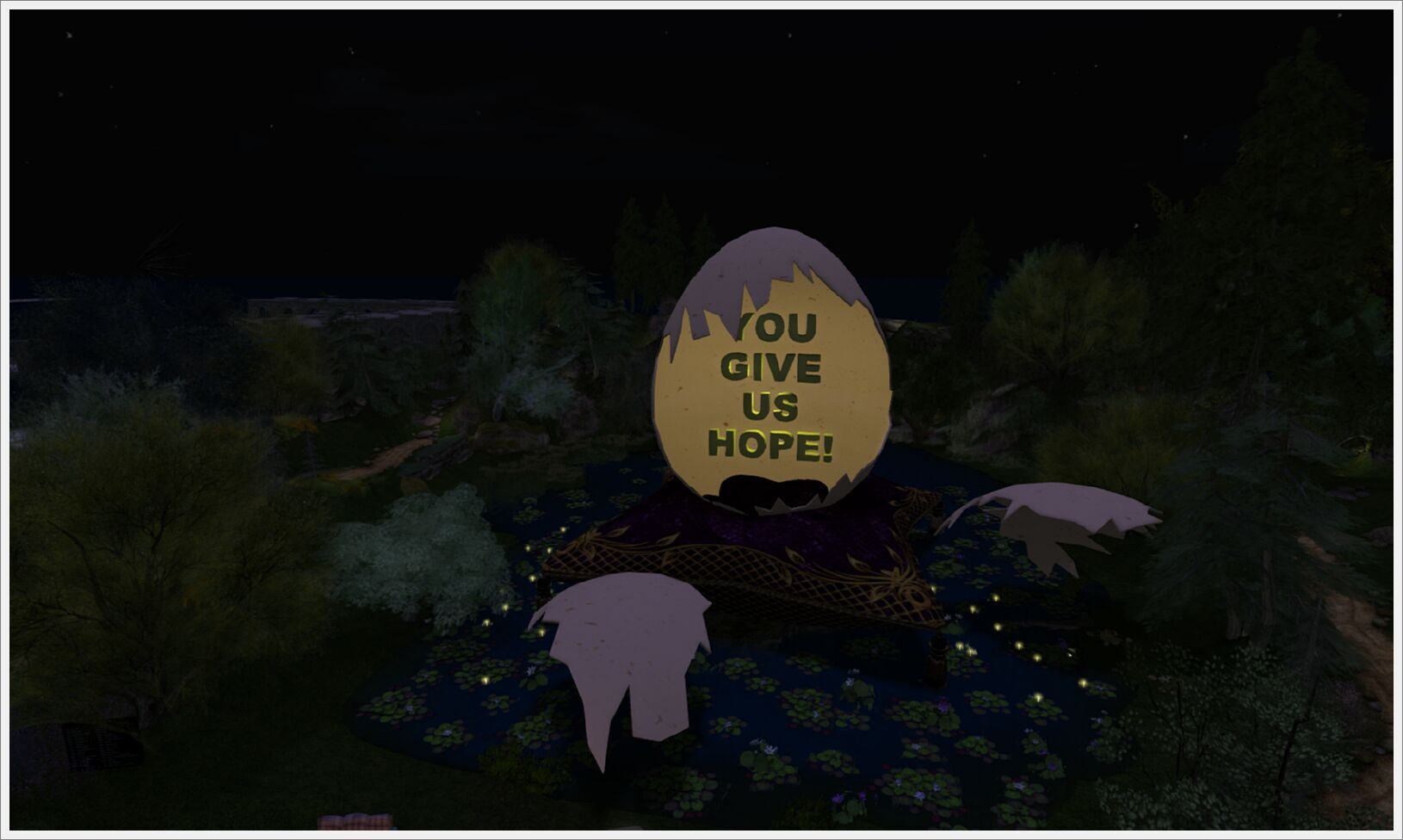 
I loved this build, It was right next to Steelhead. You donated and then clicked a sign, sadly it only worked once, and a candle on the lake lit up. All weekend the egg was un-cracked and the goal was the light up all the candles to crack it. That didn't quite happen but they cracked it anyway. And this is what was inside.

I gave the totals for the year already, though it may raise a wee bit by the time the Relay wrap up party happens in August. Not sure why it takes a month for that to happen but hey, more money!

Now, to get back to "normal" Second Life things.

Posted by Softpaw Sommer at 2:20 AM No comments:

Relay for Life of Secondlife 2015 Is over for the year 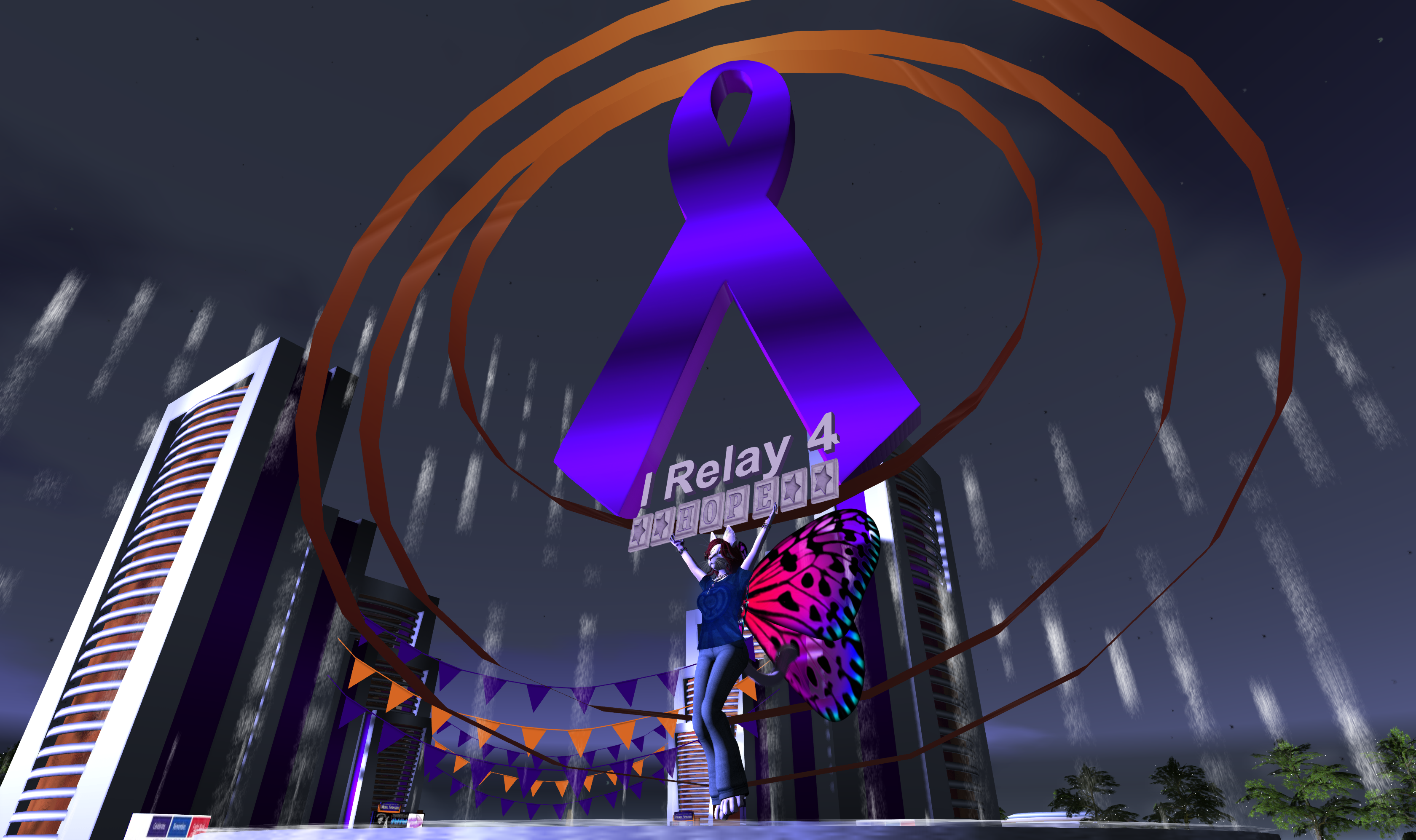 
The joy and bittersweetness of it is setting in. Was it a record year like the past few? No, but after last years big 10th anniversary blow out, that makes sense. Bit of a scale back after all the extremeness of last year. Was it still a great year? Of course! We raised $262,848 with more due in by the end of August! That's not a small amount. 1229 people ran the track, and I made my personal goal of beating last years 12 laps by one lap. Despite some worse then ever sim crossing issues before the Luminara ceremony. AND I made my none Secondlife donation goal! look!

The last $50 came from a Ren Faire friend who is a survivor. They've asked I not state their name though. Got it in JUSt as I was about to go to bed so made for a GREAT ending for my Relay!

Now, to go into these camps in more detail and see all the great things people built! Some great looking interactive builds this year!


And I leave you with a shot of Steelheads Camp. Lunar did a great job this year. 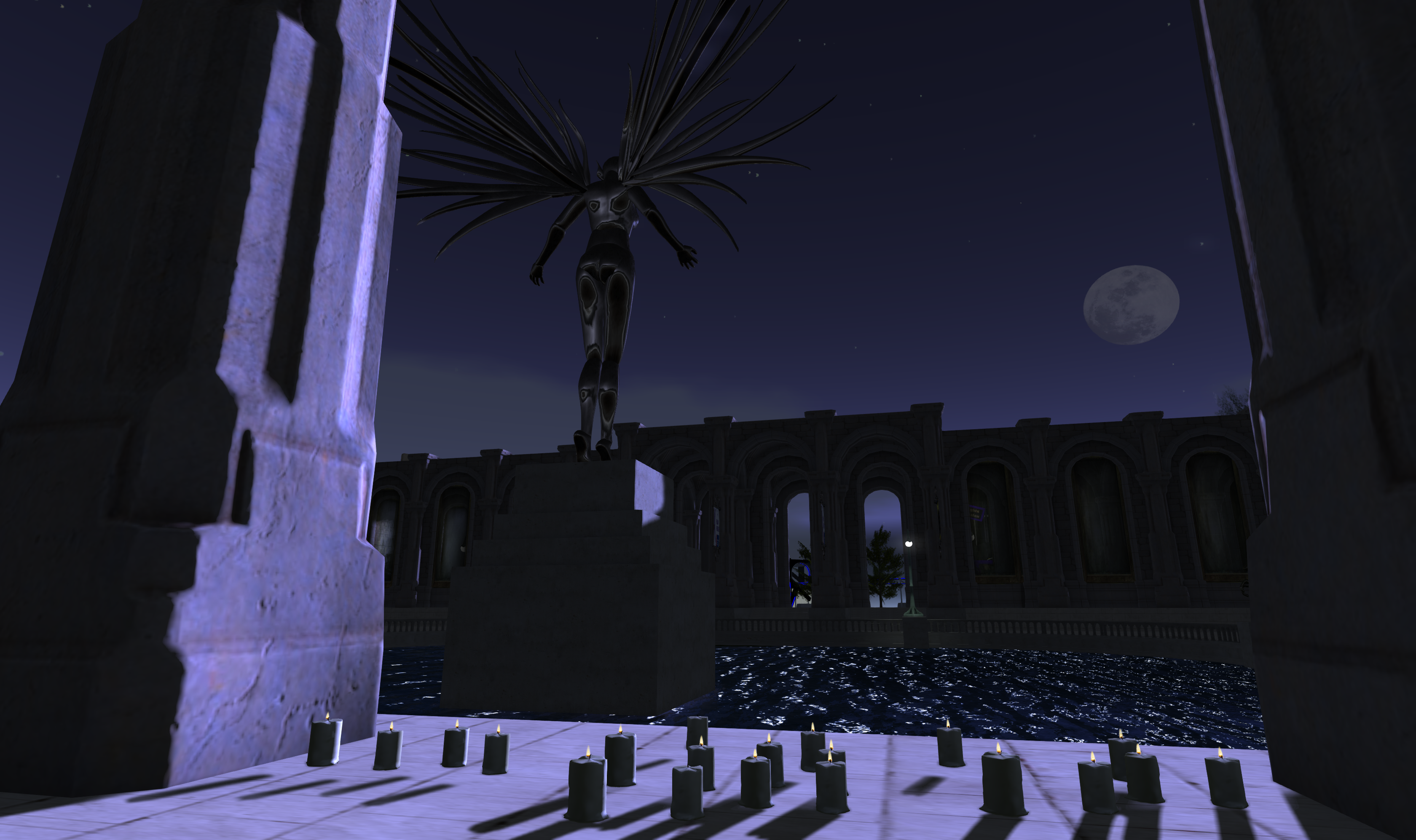 Posted by Softpaw Sommer at 10:20 PM No comments: 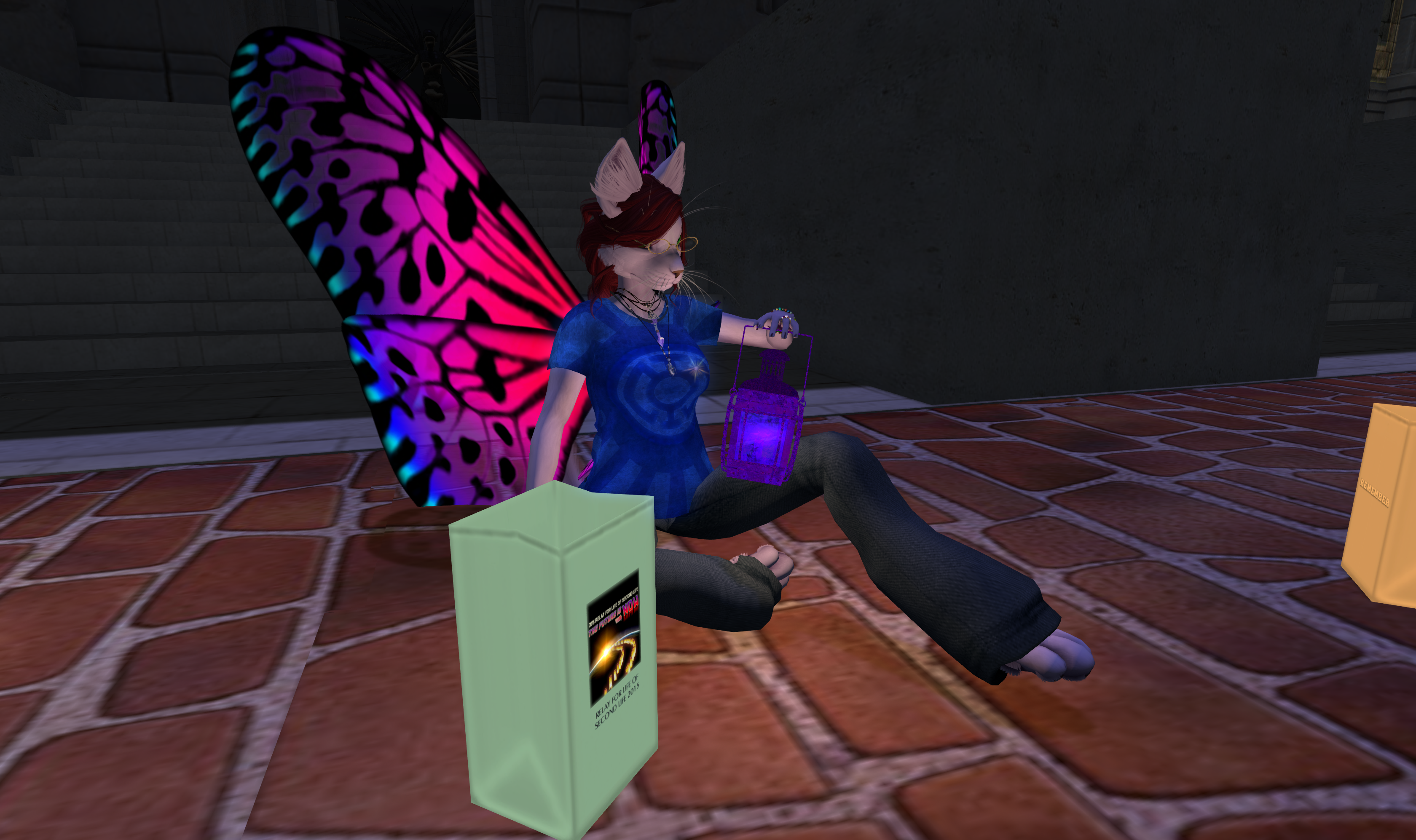 
Missing those gone and Thinking of those fighting the cancer battle.

I chose to hold a lantern this year instead of a candle to represent the bright light that Relay is in the fight towards candle. Leading the way to a cure.


Posted by Softpaw Sommer at 12:16 AM No comments:

On the track, waiting for Relay to start. last night I got a shot of each of the camp sights, Will get a good set of Steelheads amazing camp sight. And Soon Time to hit the track! 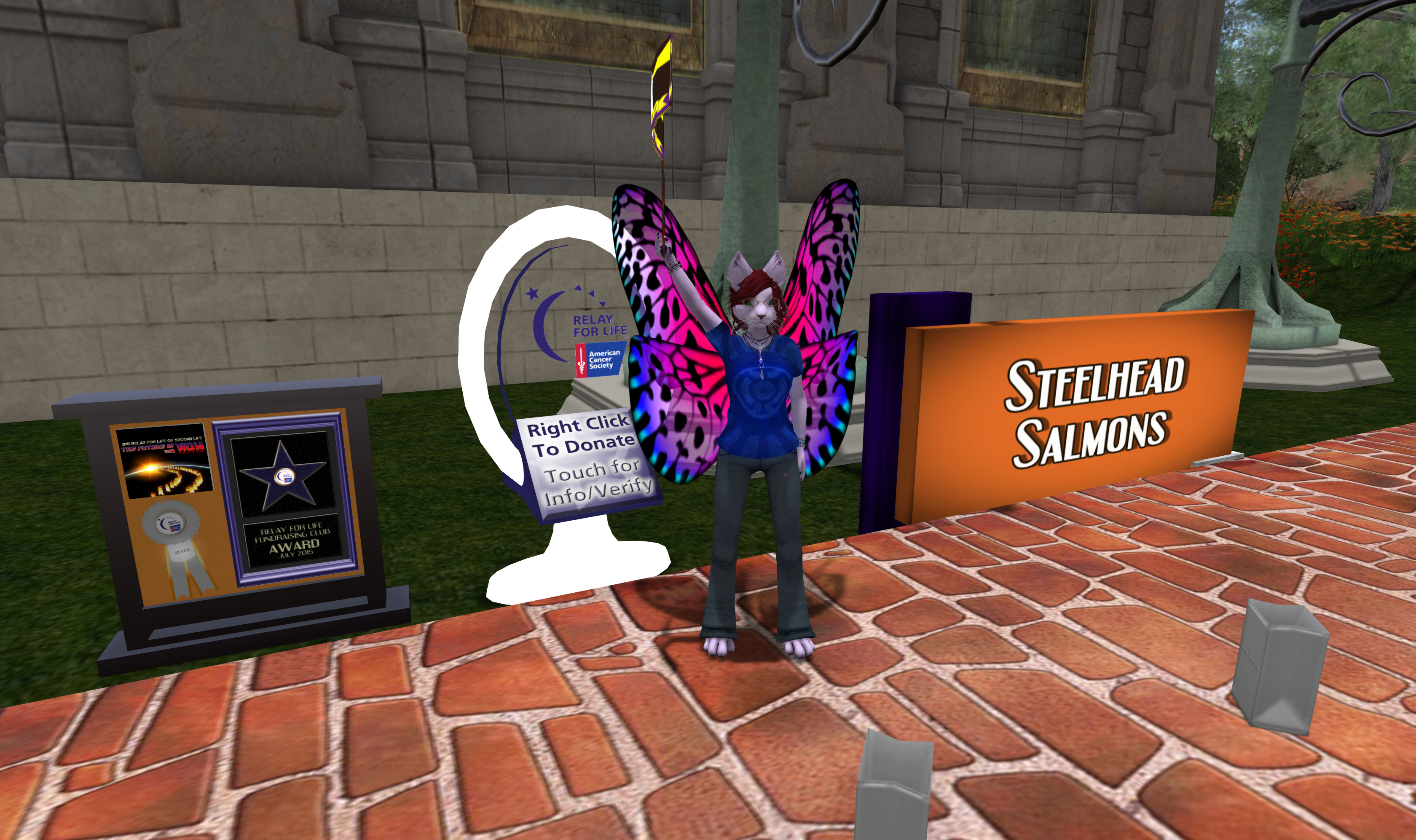 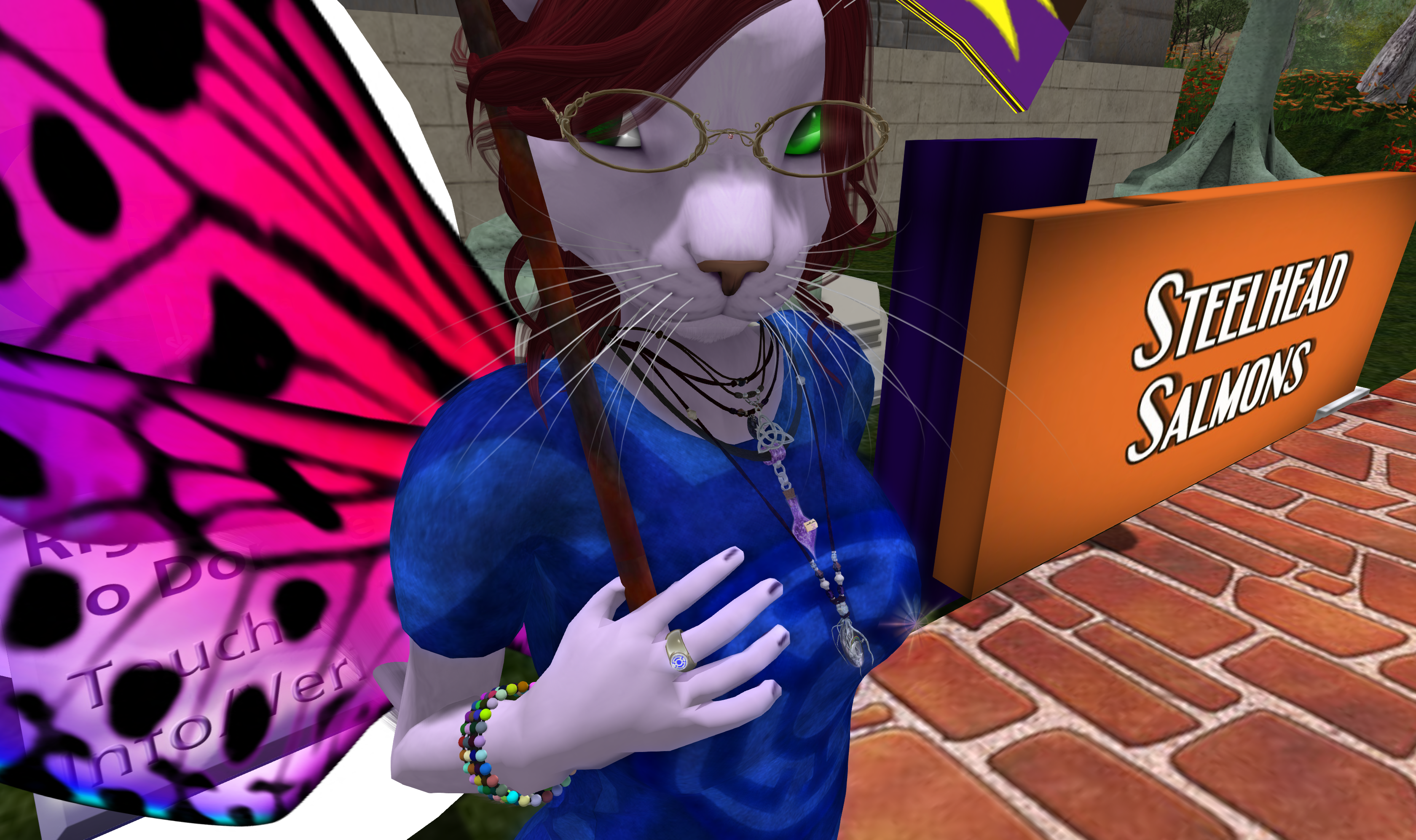 
Close up of my jewelry. I have on two necklaces that mean hope, The KM Dash of Hope Fairy Dust RFL I got at fantasy faire this year, The Bit of Hope necklace I got at fantasy faire a few years ago. And the Jewelry I wear in support of two friends, one who WON her cancer battle last year and one whose battle is just starting. Kali the Celtic Knot Necklace is for you and Momo the Bracelets are for you. Love you both.

Posted by Softpaw Sommer at 10:44 AM No comments:

I'm too pleased with this shot to NOT show it off now..


I'll have a full post on this sim after Relay Weekend, but I just LOVE LOVE LOVE how this shot turned out and couldn't wait to show it off...

And I love this tail by Jomo, Sayige Lotus had one on when I saw her at Fantasy fair and I HAD to get my own. It moves so beautifully!

Posted by Softpaw Sommer at 4:24 AM No comments:

oops I did it again

So yeah, after Fantasy fair ended this year ren faire season hit and hit HARD. It was an especially hard run between the weather *sooo much rain in Oklahoma* , some issues with other people on cast, and the plumbing in my house had major problems. So something had top give, and it was blogging secondlife. I've been trying to get back into the swing of it but none of the sims I went to and photographed really connected with me enough to make an effort to blog them on their own.

So in an attempt to get back into things. I'm doing a "whoops I forgot to blog these places" post and post links and photos to a few sims I never got around to blogging. This goes back to last year! Oldest item first

This was a fun adventure game, not so big on the horror IMO that was on a really beautifully done sim. It was a little tricky and you had to be careful what you wore as it had a script limit. But it was worth it in the end. I had fully planned to do a big post about it, but as it was almost a year ago I can't remember why i never got around to it. But here's what I wore! At least the photo, I lost the info on who I'm wearing, though if you want I am sure I could track it down in my inventory again. 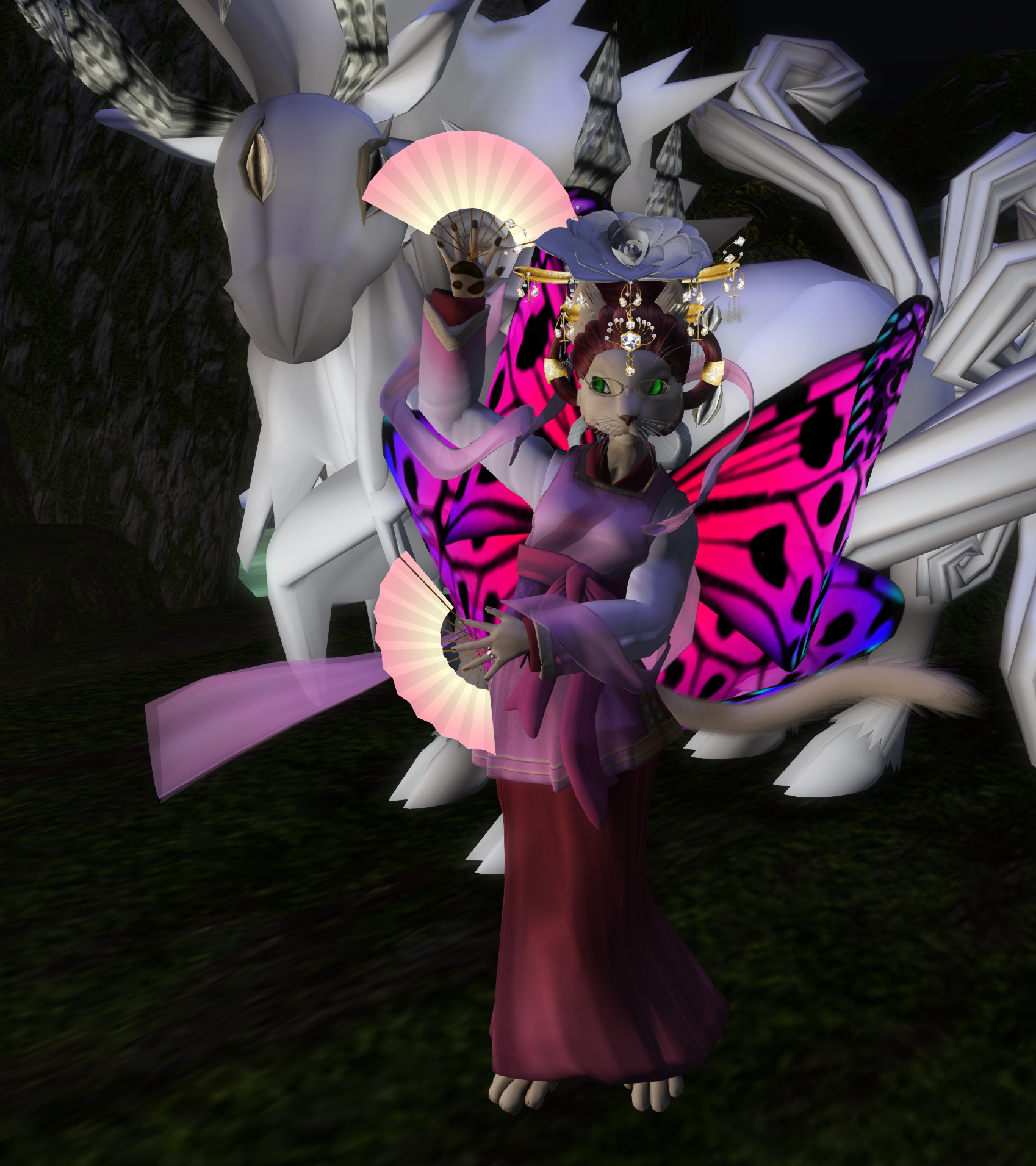 I really hope the people that put together this event do so again.


Next up, Steelheads halloween tour http://www.softpaw.org/LJimages/SL/Spookysteel14/index.html

We had some really good haunts in Steelhead last year. I loved it, so many of them where highly interactive, and didn't fall into relying on gore for the spooking. Of course I spooked up my home and the teahouse as well. there was the usually contest but I didn't win. Maybe this year! I should get to planning.

I love the first two dreams Pandora's presented, but I just couldn't get into this one and never finished exploring it.. It was a lovely build, with lots of the cute quirky stuff I love, and maybe it was just due to trying to explore while so worn out from faire. There is a new one I need to get my tail over to exploring soon.

This was a fun but frustrating quest game I learned about via Honour McMillan You set to going on a series of challenges to become a samurai. what it doesn't tell you when you start is A you have to finish it all in one log in or your progress is lost on some of the challenges, and B for a few things you will need a friend.

The prize is a very nice set of armor and AO so if you want to have a go at it the SLURL is http://maps.secondlife.com/secondlife/Soyokaze/232/94/23 and if you need help just IM me! If I'm on I'll pop over and give you and hand.

Steelhead is having an artwalk in the sims, for RFL and for fun. I was asked to join with some of my photos I take. I couldn't decided which older ones to use so I just went from sim to sim in Steelhead and took new ones! I have them hanging up in the teahouse, but the resolution isn't that great, so I loaded them here so you can see them in all their glory.


And that's the catch up post. I'm not going to go back and try to make up with the weekly themes I've missed, though I will for the pin ups. I'm not fully sure yet if I'll be starting back with the weekly theme either. I wasn't enjoying it that much myself and no one else was doing it..so...shrugs

But I am going to work on posting more! Though this weekend, first and foremost is Relay for Life! So posts will happen about that at least!
Posted by Softpaw Sommer at 3:23 AM No comments:

It's America's Birthday! Have a great time today! 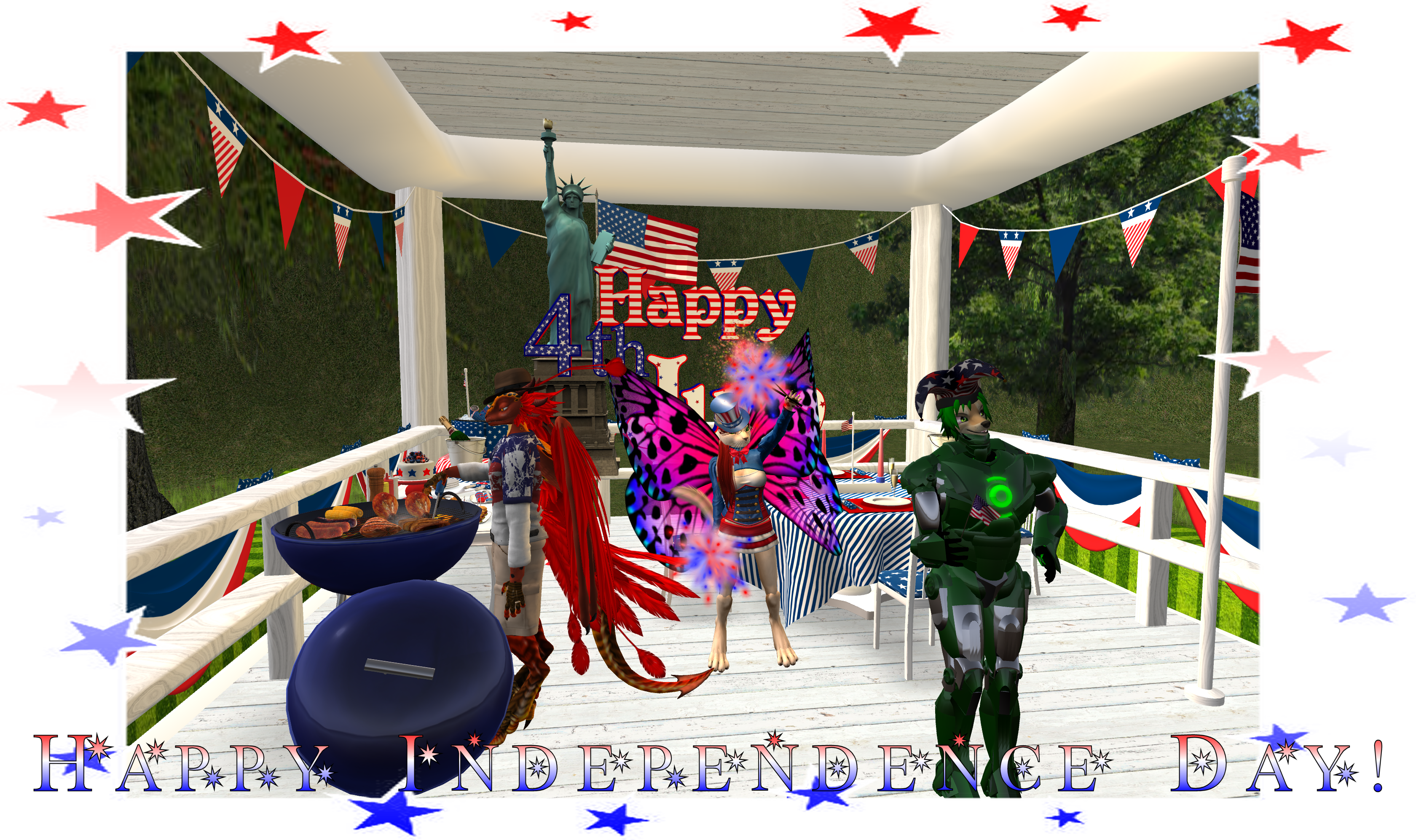 Click for Bigger
Posted by Softpaw Sommer at 1:05 AM No comments: