This color was a PAIN to find. In the end I gave up and tinted stuff. I really like the effect I got with the sheer parts of the top. As this was another Green Turlock wanted to join in the fun. And this time he stuck around the sim and checked it out with me!

I chose an art installation for this color. Sniper Siemens, has painstakingly recreated many of Da Vinci's machines in world for you to see. Some have moving parts others don't. And there are notecard for each machine. That..I did not take the time to collect and read because I am the lazy.


But all of them are fascinating in their complexity and detail. Plus the sim they are on is stunning. 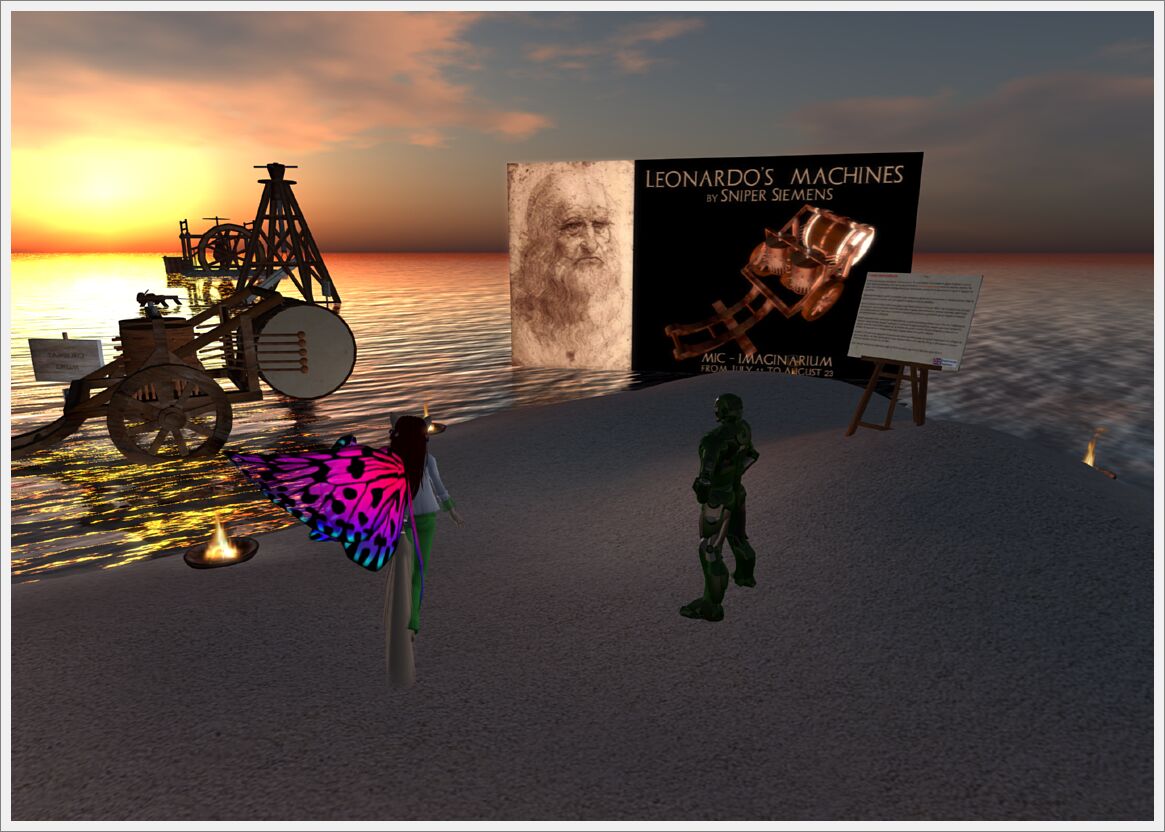 
The water is barely over my feet so don't worry about stepping out into it. The sunset behind them is amazing. 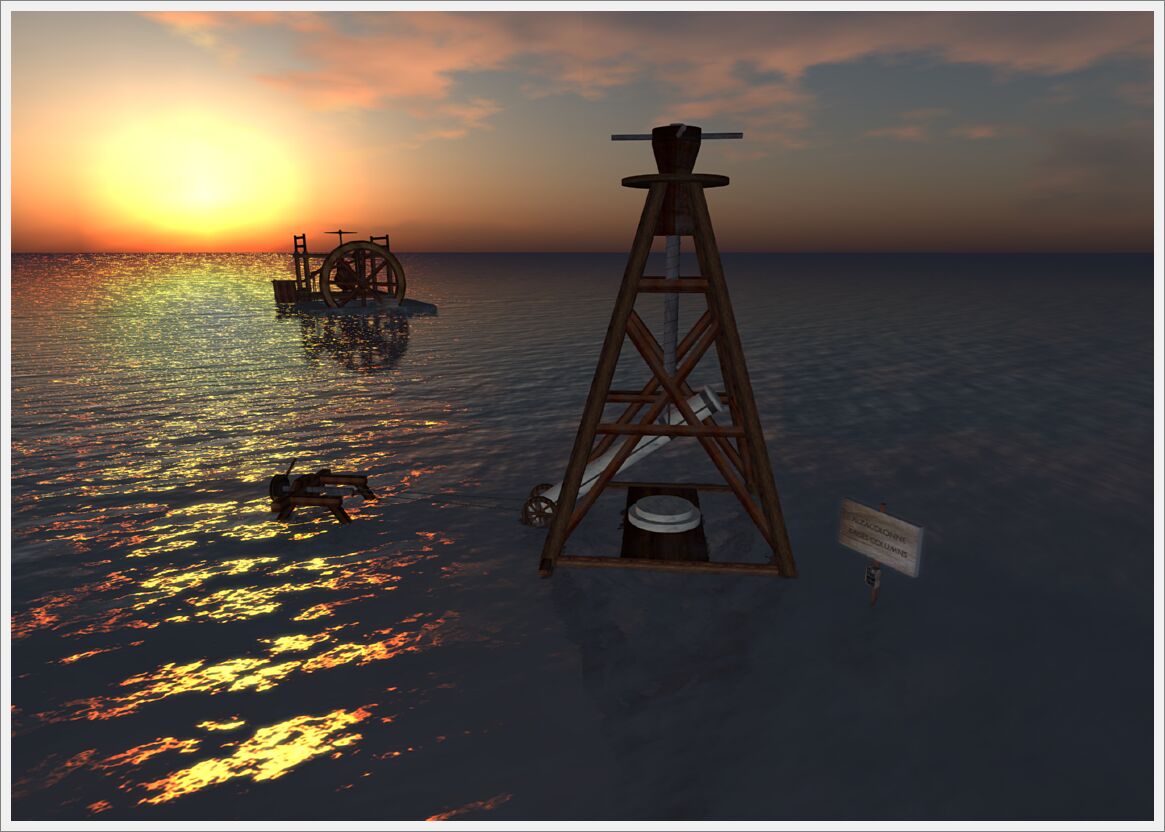 
I did not go on land to check that out. Should have, but I wanted this to focus mostly on the machines. 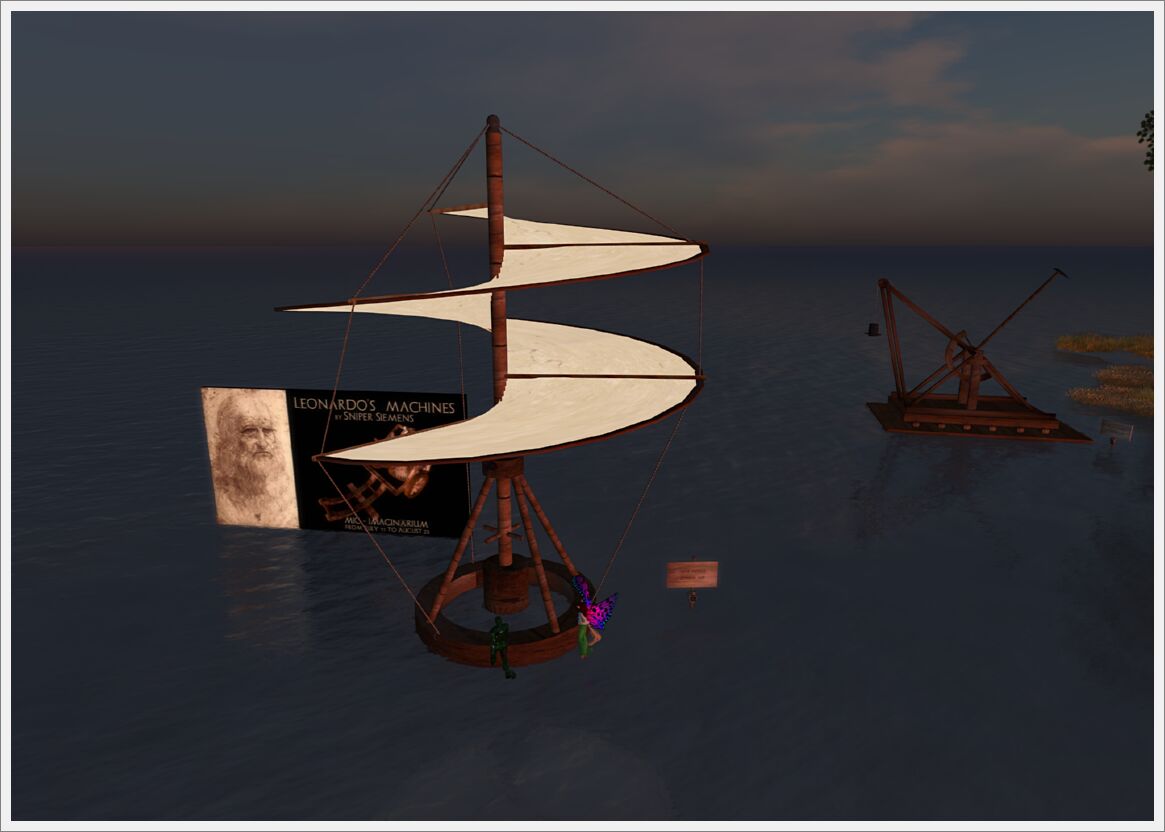 You can see all my photos here


And I am now going to be obnoxious and subject you all to a photo of my new fur baby we got Friday from a local shelter. 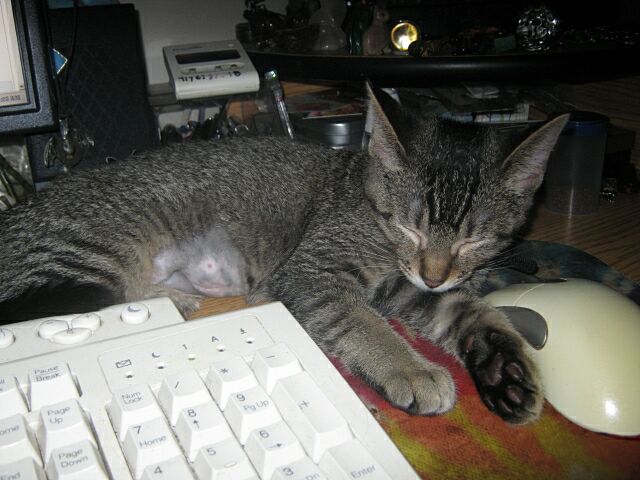 Her name is Isis, and she's four months old. She's so fricking adorable!

Why yes I am a proud new kitty mama!


Cleek here to see more photos of her!!
Posted by Softpaw Sommer at 4:22 AM 4 comments:

It was another amazing build, built to honor Caregivers of those that have Cancer. Next year there is talk about the clanks you see being turned into Avatars for sale with the funds going to RFL. 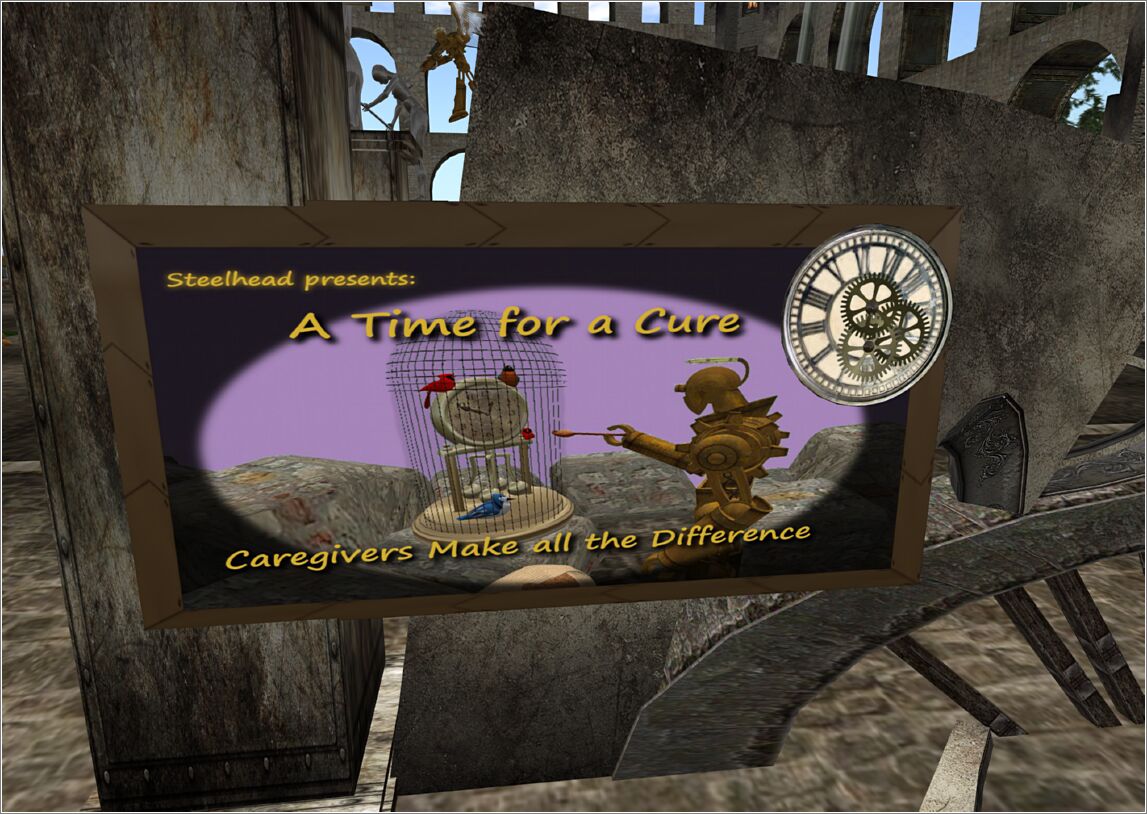 
I had thought about using this post to do my Relay wrap up, but chose not to. Instead I'll just show off some of my shots from the camp build. If you did not get to see it in world before it was taken down you really missed something special! 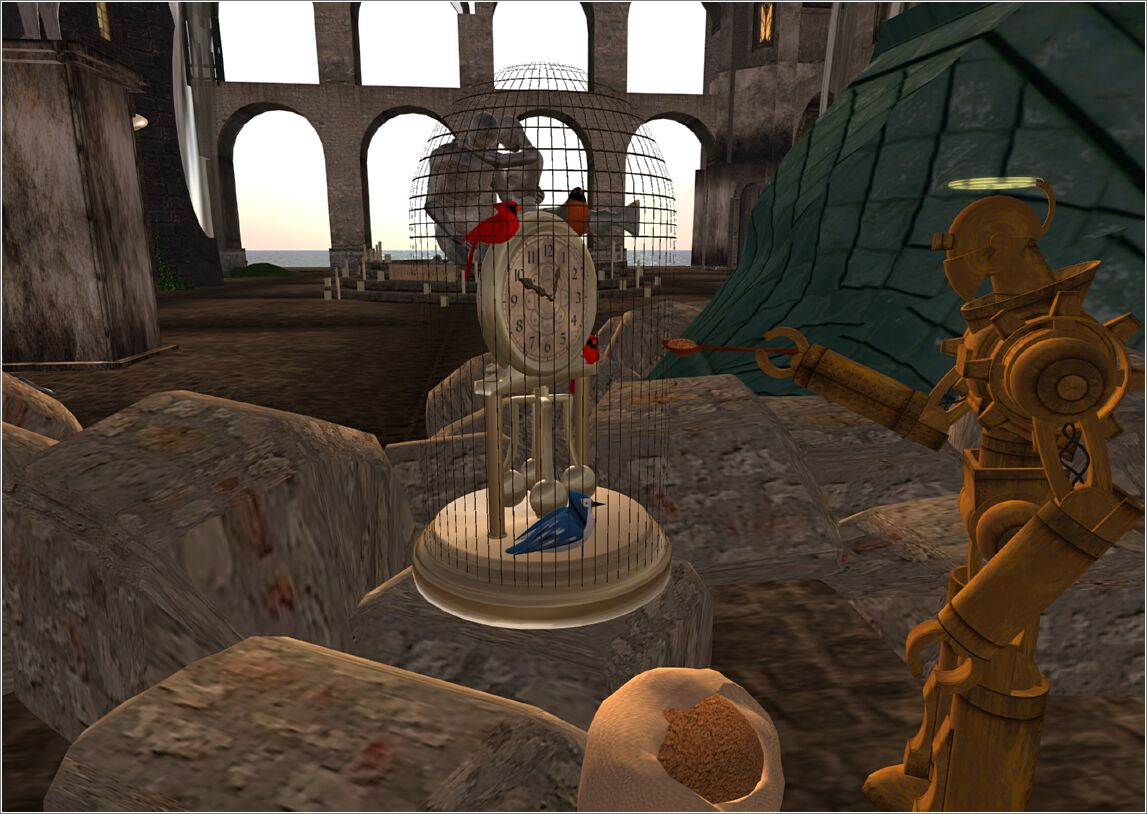 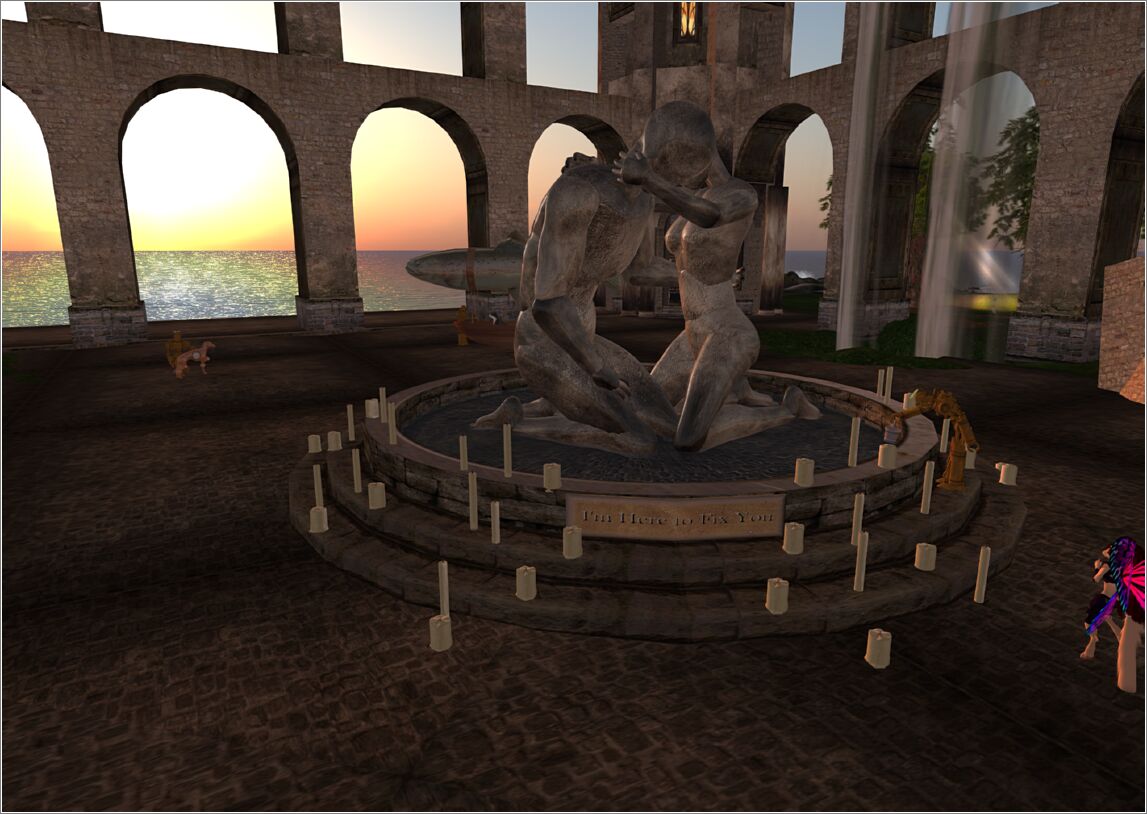 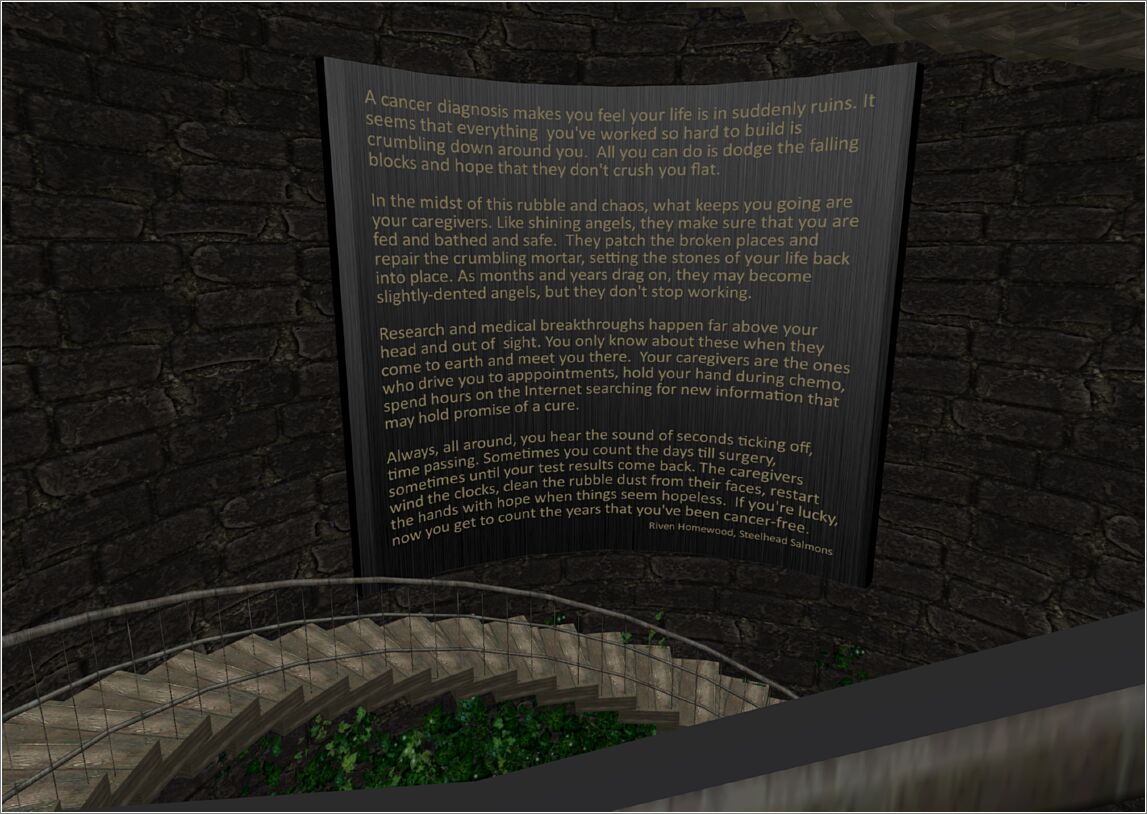 And too those of you out there that are a Caregiver, thank you.
Posted by Softpaw Sommer at 12:38 AM 2 comments: As I am currently frantically trying to make it through the Relay sims one last time for photos of things I didn't get to see during the relay itself. I'm pausing in RFL Dedication to remember all the amazing events that happened this season.

What a ride!
Posted by Softpaw Sommer at 10:01 AM No comments:

For this week’s color, which is an incredibly BRIGHT shade of pink, I decided to pick up an outfit I've pondered getting but had no good reason to have.

I actually pieced it together from various bits as you can see. The effect in world is SPECTACULAR! Because the items by Rosal are animated! The pink lines move up and down and it’s really a sight to see! They are also tintable so if you want them not in pink you can do that. I couldn’t figure out what to do with my tail so I left it out, and I couldn’t find a helmet with ears so got a normal one. Which is also tintable. The ID disc came with the base suit.

I did a search for a Tron sim, I figured there HAD to be at least one, we do call Secondlife the Grid after all! And found Tron System Reconfigured. Which while rather empty is amazing for its detail to the locations of the movie. I had fun exploring. 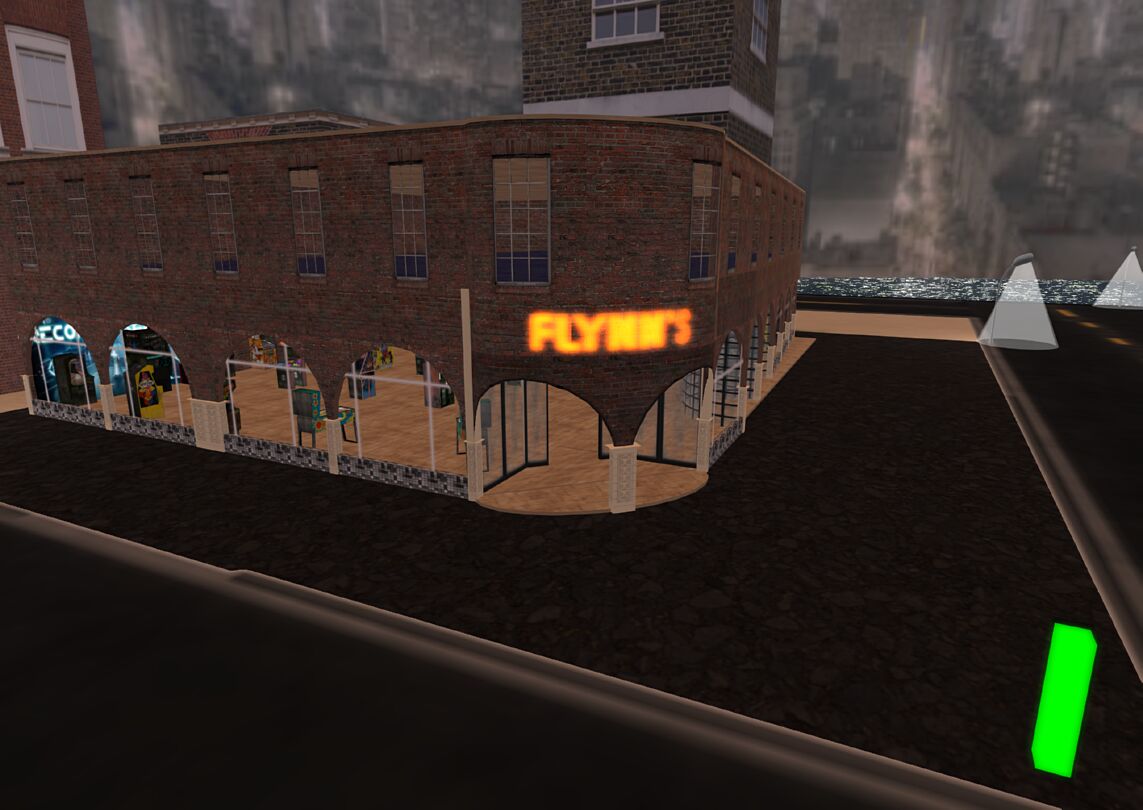 
It has light cars you can rez in several locations, both just to tool about the streets and in an arena. I had a bit of fun zipping about in one. And YES it leaves the light trail! 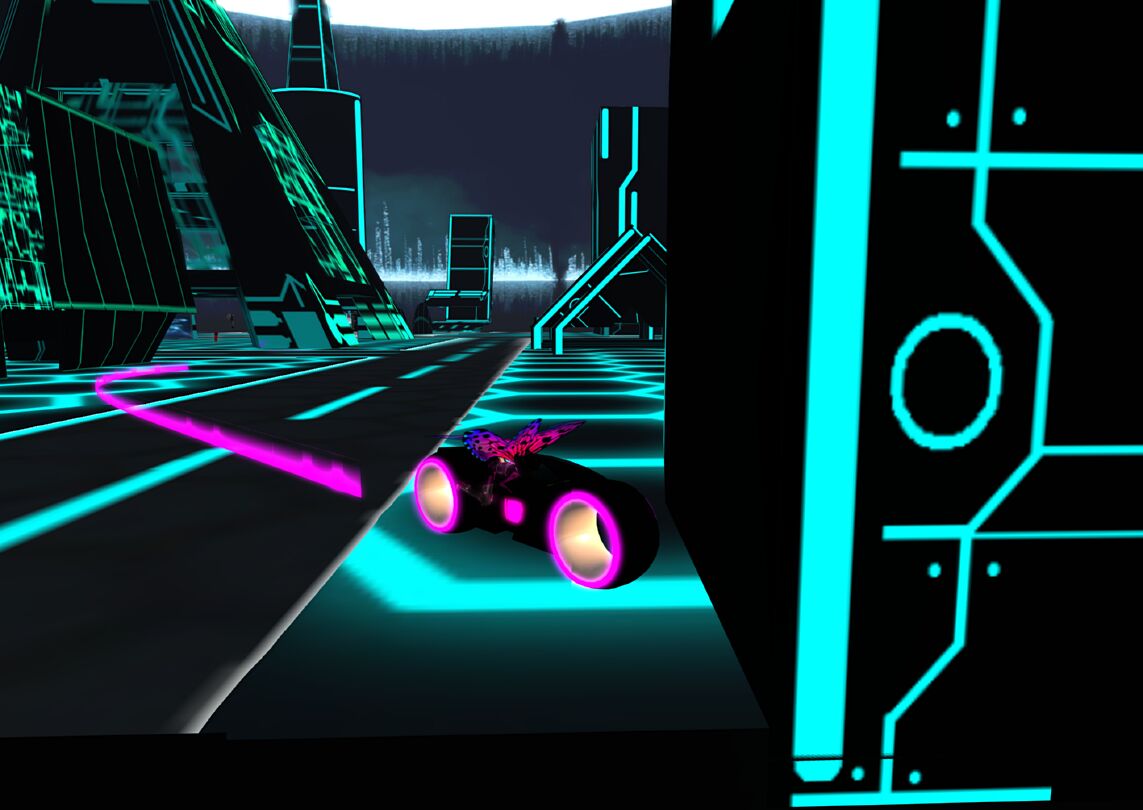 
It has several levels that you get to via a teleport system. A few locations I remembered from the second film, and a few are from the first. And one I have no clue about, that had some vendors.

Go to play with the light cycles if nothing else! 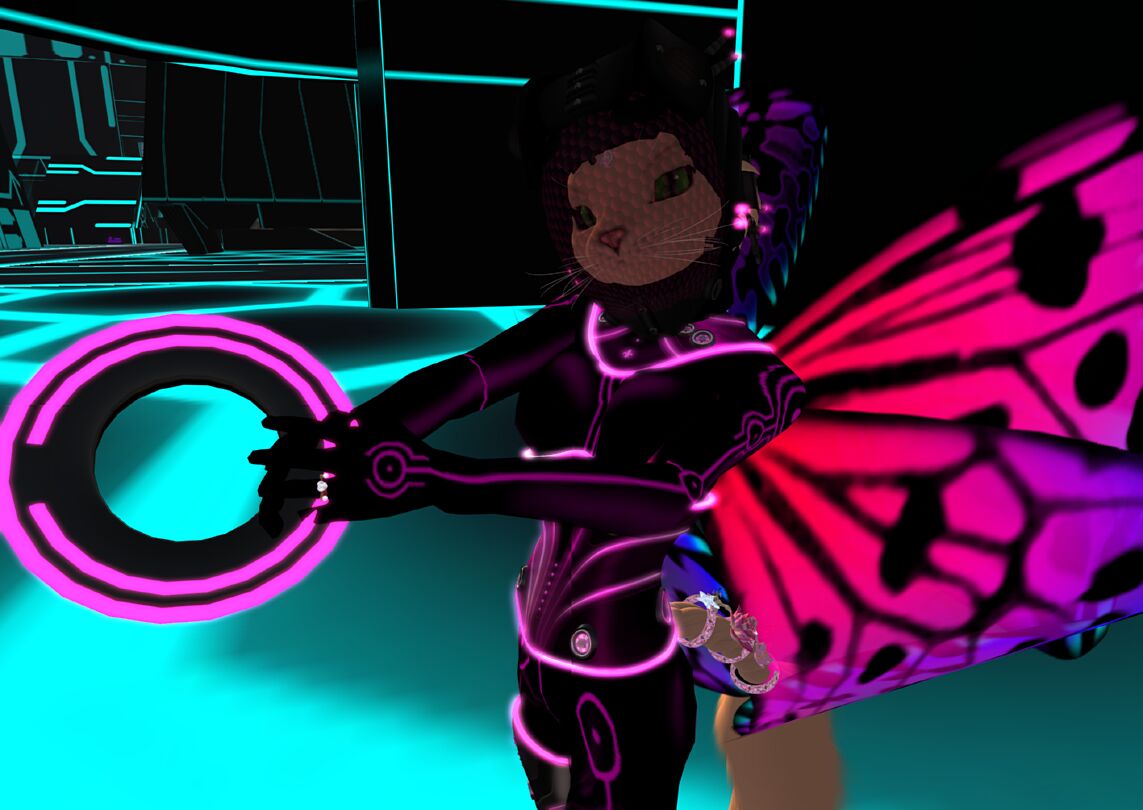 I love this shot so much.


This Link has all the images I took.

Next week’s will likely be just the image, as I'm spending most of this week doing a more in-depth exploration of the RFL sims. There will be a post about this weekend soon as well.
Posted by Softpaw Sommer at 5:00 AM 5 comments:

Today is Adar's Birthday. Not is REZ day..thats in ummm..April I think. But his REAL Birthday

So I made this! 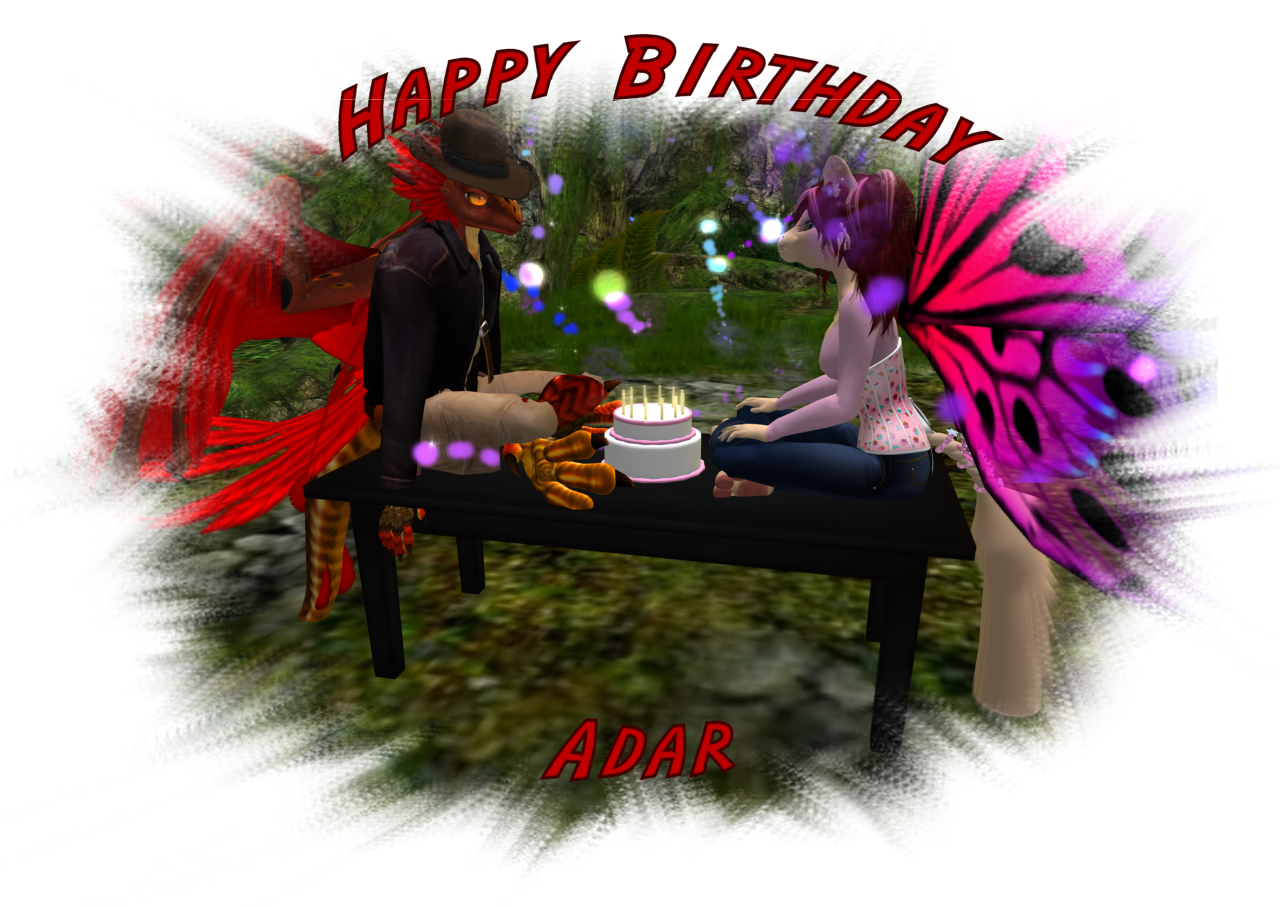 Happy Birthday!!
Posted by Softpaw Sommer at 3:09 AM No comments:

Relay is done for the year! We had a ton of fun and raised a TON of money for Cancer Research. Current Total is $339,661 USD and that's with a few things left to be paid into it from the event today. Plus they usually still accept donations till the end of July.

We WILL find a cure one day!!


Now to go face-plant into bed...awake over 30 hours now. 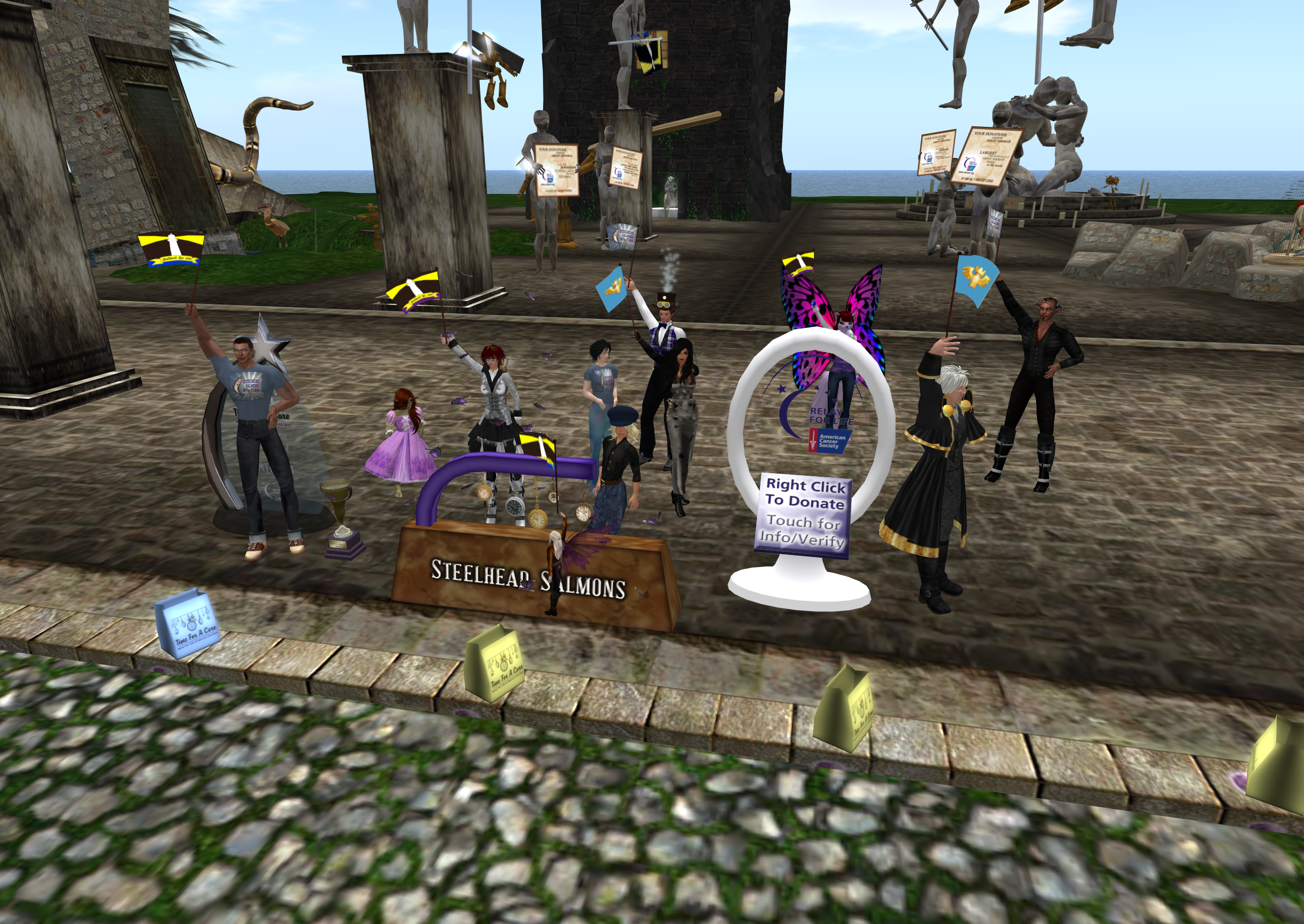 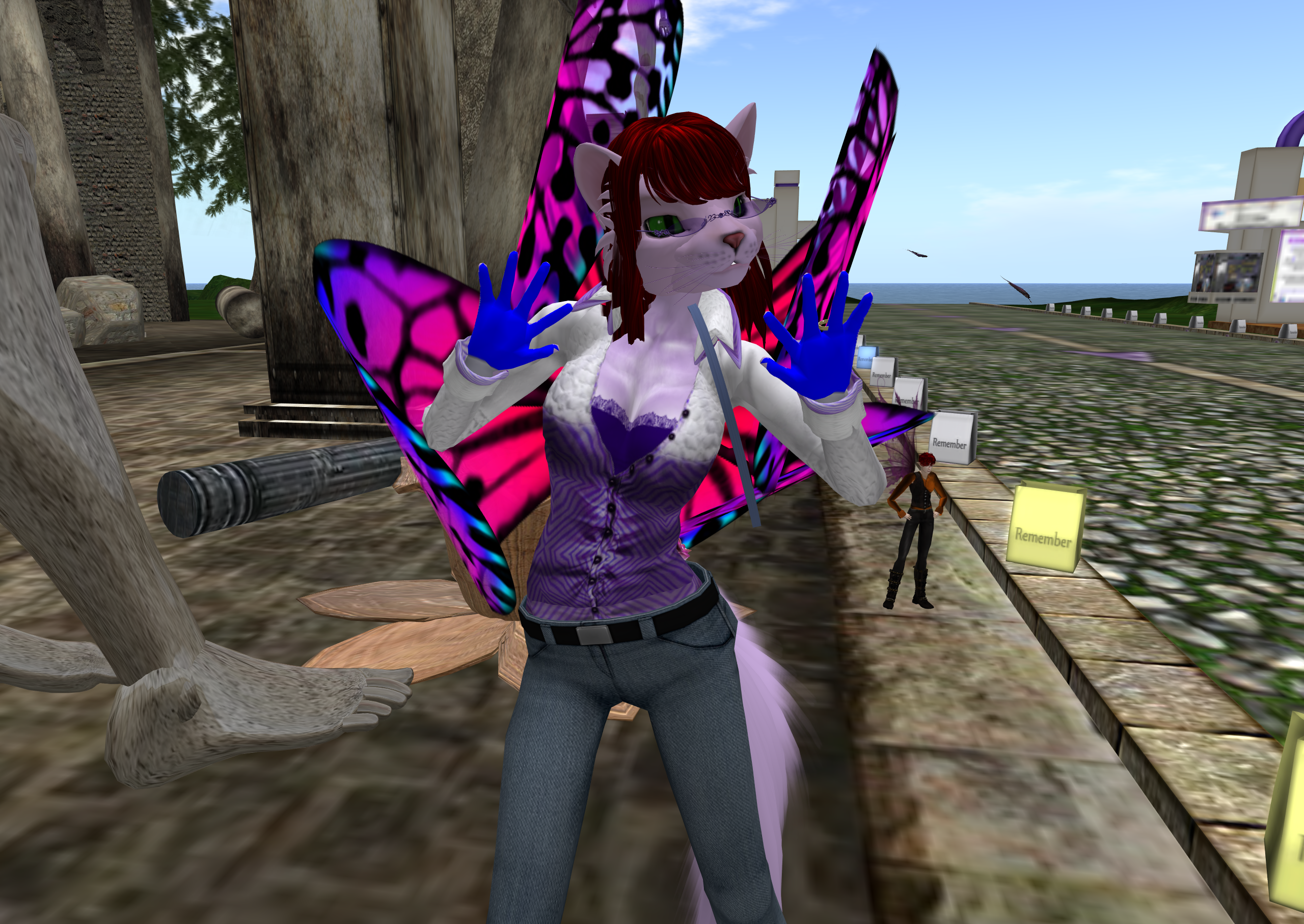 This past January my little part of the Renaissance faire world lost one of its own to Brain Cancer,

He was a Rouge with a heart of gold. Pat Patterson AKA Argon of the Blue Hand. A member of the Rouges Gallery of the Kansas City Renaissance Faire. I knew him via a smaller faire called Whitehart.

As I Relay today my Palms are blue in Pat's Honor.


I dedicated the majority of my Relay Participation this year to him. But it is also dedicated to my Uncle and Turlock’s' Dad, both whom had Prostate Cancer surgery this year. And to Adar's Dad who had it several years ago.

The guys will be joining me on the track later today to do a lap in honor of their Dads and in Pat's honor.

Posted by Softpaw Sommer at 11:06 AM No comments:

Thank you to all of those that donated this year! It makes me happy to have people donating to my meter other then me! You have NO idea how much that means to me.


Chomping at the bit to get into the sims today to get an early preview of the sims. I'm to be a guide this year at the start to let all the Survivors and Caregivers, who get the honor of the first lap, when to start walking.


Here is this years track 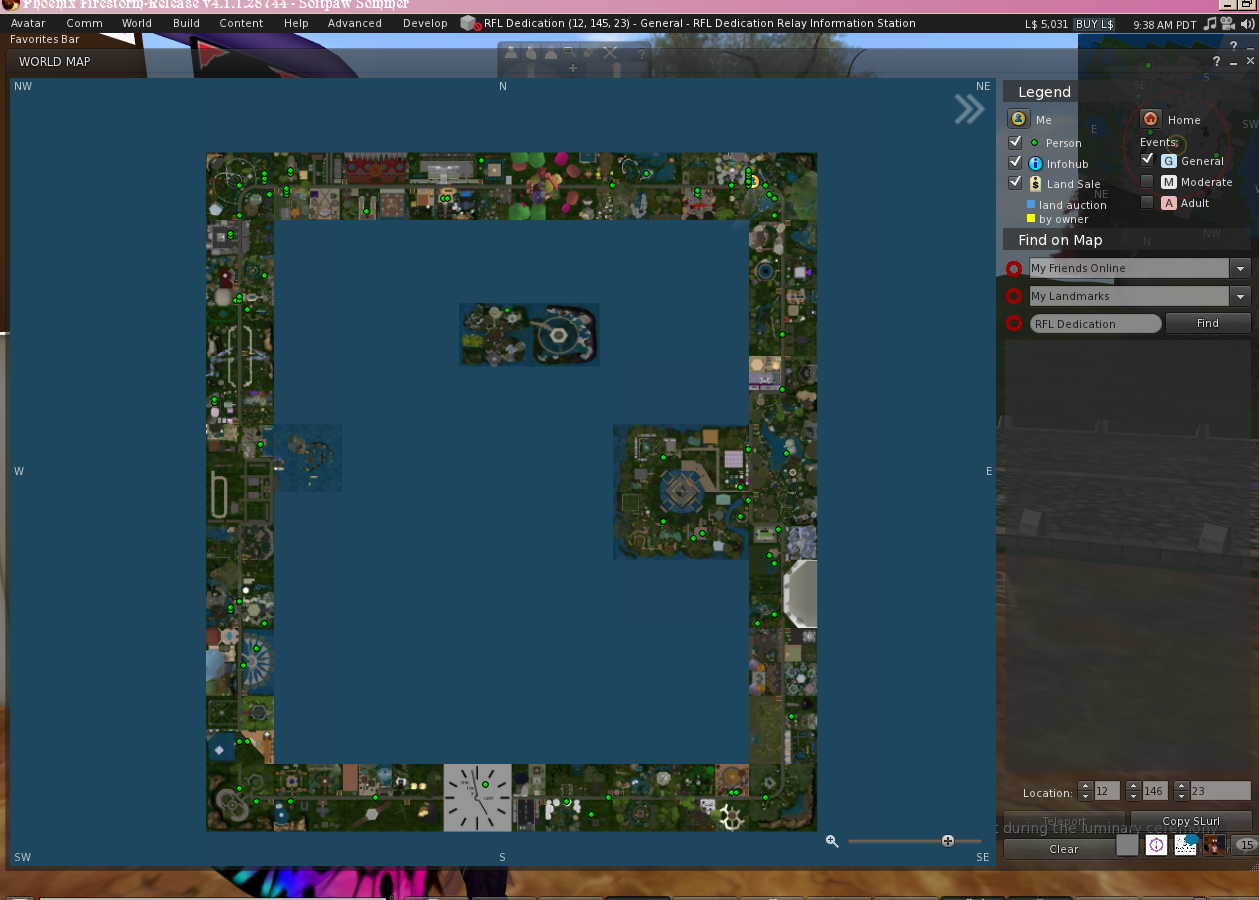 
That's 40 sims and a lot of track! They added some turns in other then the corners this year!
Posted by Softpaw Sommer at 11:50 AM No comments:


Ugh..our AC is broken and wont be fixed till tomorrow. The house is currently in the mid 80's I am hot tired and grumpy so this is gonna be short.


My lovely outfit is a recreation of one of the late Eiko Ishioka's fantastic outfits from the Movie Mirror Mirror. Which I have seen and throughly enjoyed. Fun lighthearted silliness it is! This was actually my favorite costume in the movie as well. So I was pleased to find a SL version. 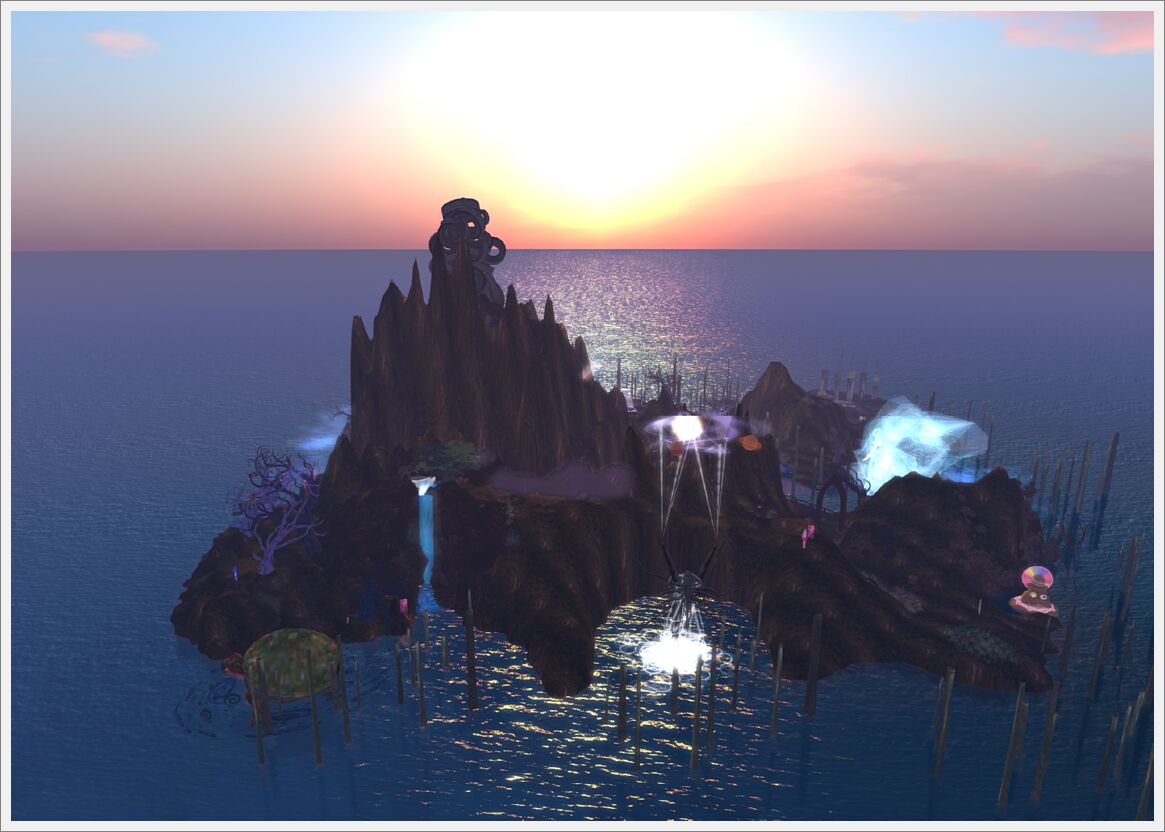 
The sim I went to has an art installation called a Gathering of Sky Women. And while the builds are impressive, I would have loved some note cards taking about the various goddesses shown and what the artist is representing with certain things. Like the giant tower of Tires.

The Destination guide blurb about it reads

This sim-wide art installation features works by six artists: Asmista Duranja, Fuschia Nightfire, Louly Loon, Lilia Artis, Trill Zapetaro and Katz Jupiter. Located in a beautiful surreal setting, six goddesses have descended to a world that has changed significantly since its creation. What would they say? 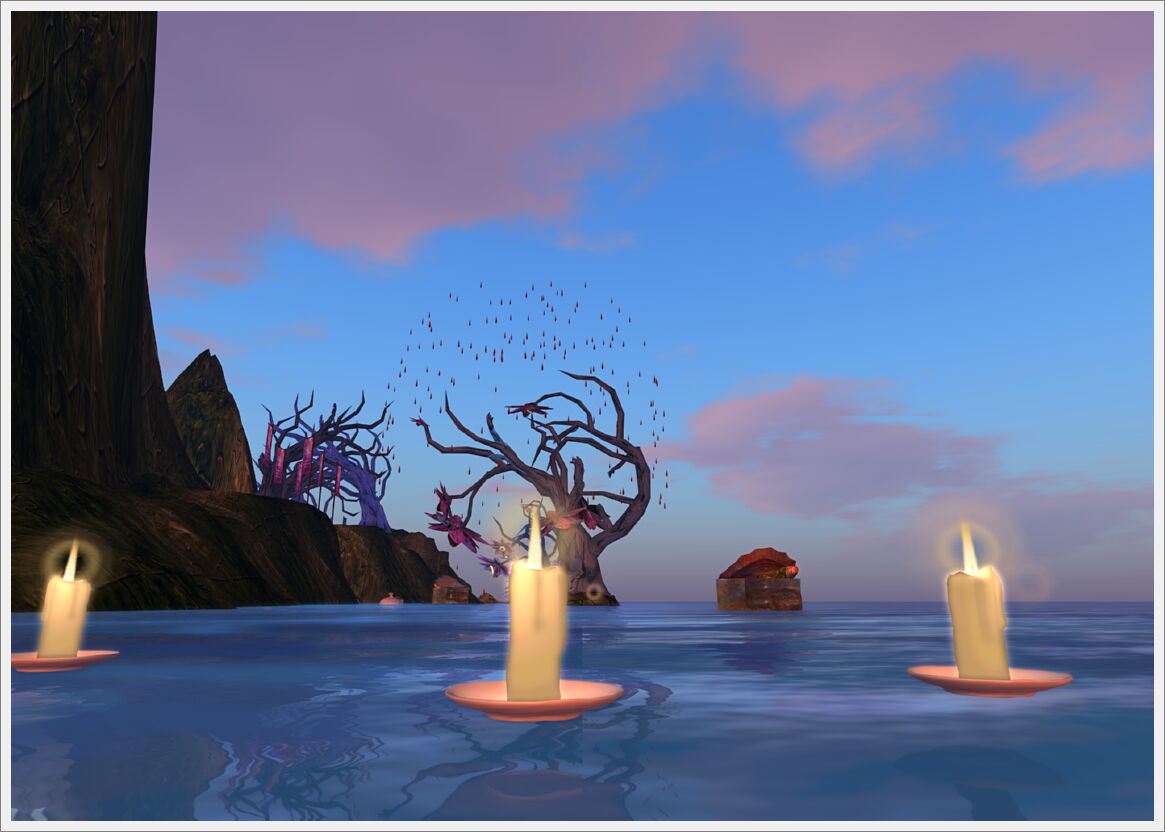 You can see all my photos from this location at http://softpaw.org/LJimages/SL/Skywomen/index.html

And..thats about all I have the energy for, time to go find someplace cool! Thank goodness the Bedroom has a window AC unit!
Posted by Softpaw Sommer at 9:02 PM No comments: 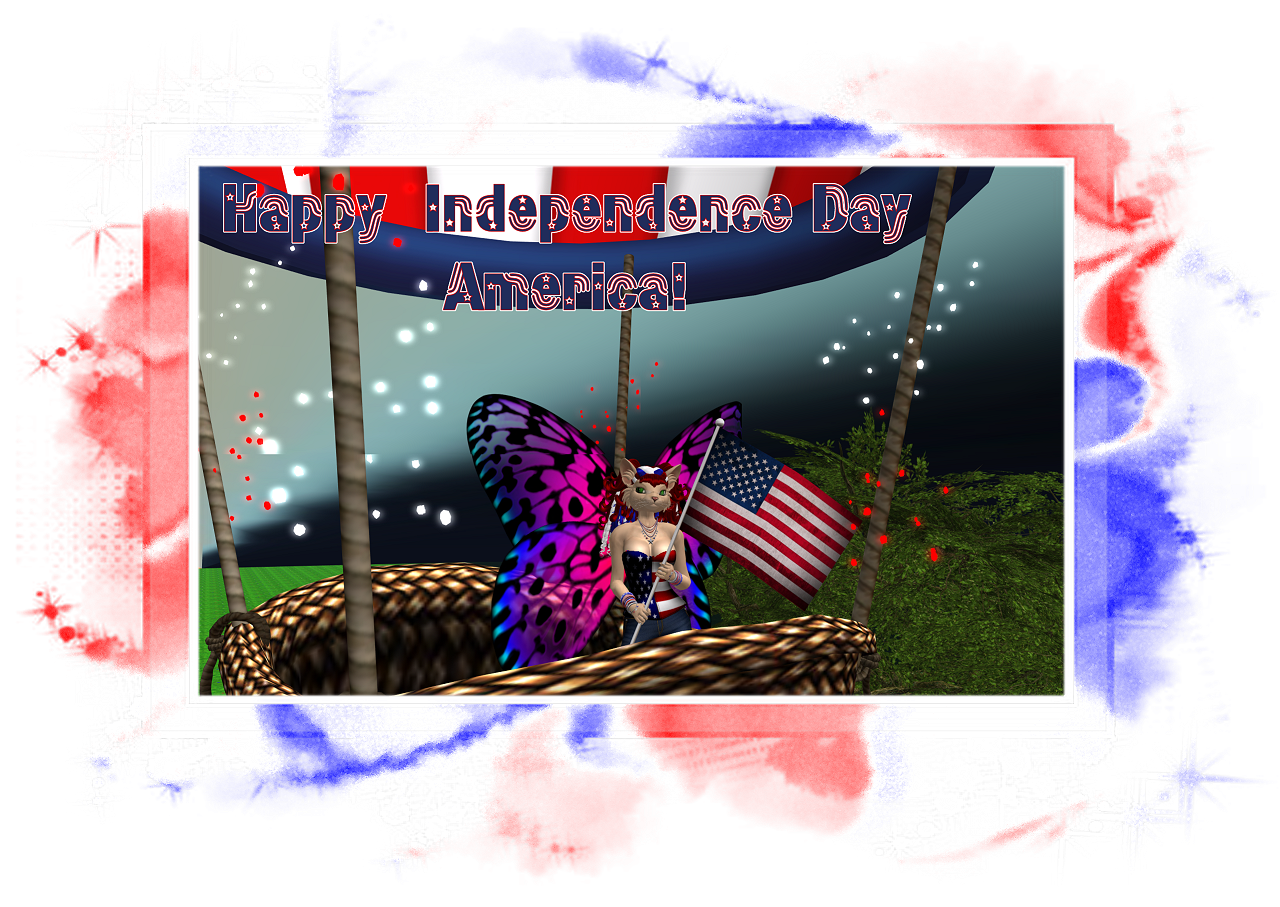 Click to see bigger
Posted by Softpaw Sommer at 12:10 AM No comments:

YYAAAYYY Car issues! I was too busy last week to get 26 posted or go to do anything for 27. So you get these!


I went to the most rusty place I could think of for this shot. New Babbage!

For the next color, I actually DID go through my clothing and found the right outfit. Then remembered I had already TAKEN a photo of me in it back in January that i never posted. So I figured I'd just us that shot instead of taking a new one. And managed to remember everything but the pose!

This week, except for the fourth and a trip into town, I have NOTHING PLANNED. so looking forwards to a restful week! Now to find a great place to go for the next color.
Posted by Softpaw Sommer at 7:19 PM 1 comment: