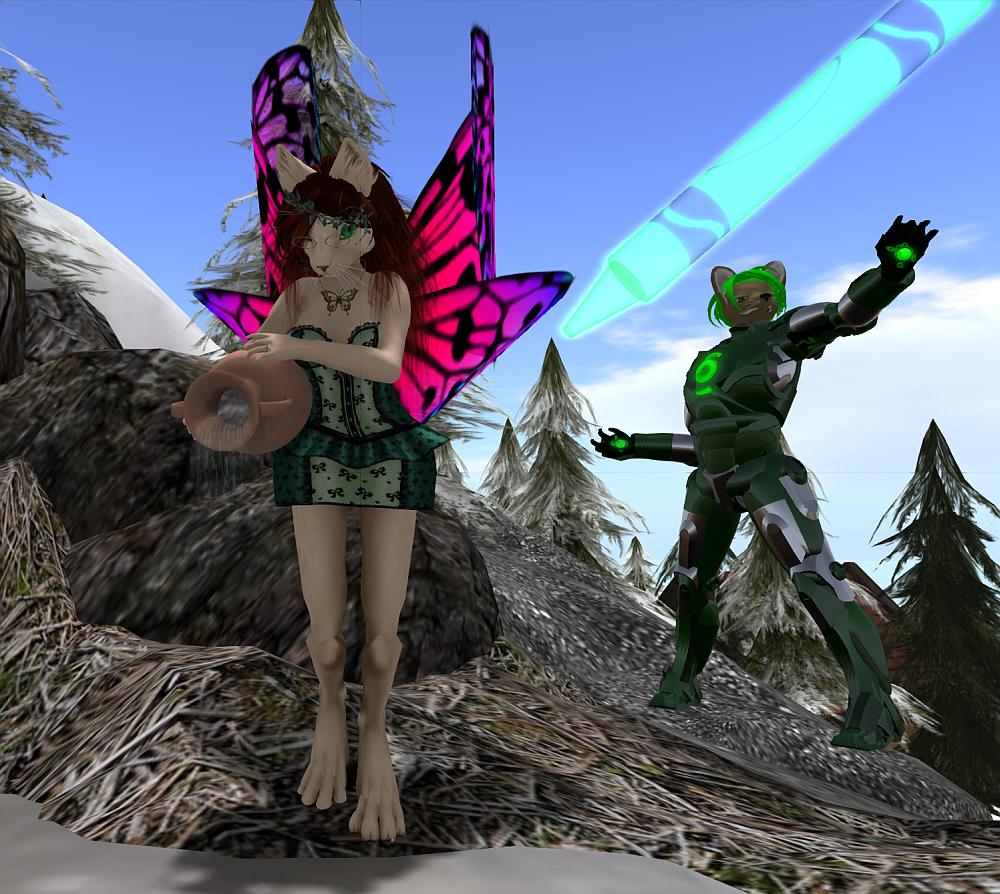 
I'm late in posting this as I was waiting on info on both my hardrive and trying to get a hold of Ambrose.  I'll explain that in a bit. For now ..the color!

Mountain Meadow, is yet another color only available in the big 120 pack and was introduced in 1998. I so did not do that on purpose, but the newer colors have such fun names!

Finding this shade was so tricky for me, its such a dusty shade of green. Everything I was finding was too yellow or too dark.  I did eventually track down this cute lil mesh number from katat0nik that worked!

I decided to go to Steelhead St Helens' for the photo, due to the color name, and when is saw the waterfalls on the mountain I knew the perfect pose was at the current round of Zodiac.

As for what Turlock is doing, his idea was that since it was a green, he'd be uh..coloring..my outfit, or somethings along those lines.


I still do not have my master color list. Ambrose up and moved on me into a new apartment, and does not have internet in it yet. I was getting so worried when he never responded I ended up calling him today and found this out! he said he'll try to get me it tomorrow when he goes to his moms house.  So for next weeks color I looked at the crayon list and picked one at random.

As for my hard drive's state. I'm in a holding pattern on information on it. Marsh says he thinks it got damaged in transit to him, as now it wont come on at all, when before it would boot up, just get stuck and not open windows.  He's got a few more tricks up his sleeves to try before he calls it a loss though. So cross your fingers everyone!

He's also already working on setting up the new computer for me, even has already installed both the official Sl viewer and firestorm!
Posted by Softpaw Sommer at 2:04 AM 4 comments:


Ambrose is super lagging on getting me my color list! I dunno why I have only managed to catch him online once. But I looked at the master crayon color list on Wikipedea and remembered what one I used. Hopefully I;ll have the master list by Wednesday so I can make the post for the next color then.

I'm able to go in world via Adar's computer. It's set up in the living room attached to the TV so using it is awkward for me, it works for him.  I am not comfortable enough using it to explore so till I get mine working again I'll just be doing a pose someplace around the Steelhead sims.  Adar's comp has no image editing or gallery making programs on it as well. I have to send the photo to Turlock for cropping and resizing so really, this is the easiest way all around.

When I'm not on Adar's comp for secondlife, I'm on Turlock's netbook, which is tiny but better then nothing!

On the state of my computer, the hard drive is on its way to Arizona to be recovered. My computer guru, a dear friend for well over a decade who works in IT professionally,  swears on everything he knows I hold dear he can recover all my information on it.  He'll have it in his hands on Tuesday so I am holding in a funk over loss of years worth of files till then.

When he returns it, no matter the state, it will be with an upgraded computer. The one I was supposed to get last May but we had some issues.  So...shadows! yay!  Also windows 8 so that's going to take some getting used to as I was working off of win xp. I hate that it took an event like this to get the upgrade, but also looking forwards to getting it back.  Granted I'll be paying Marsh money out of every paycheck for MONTHS now, but it will be nice to not be working off of a 5 year old computer badly in need of upgrading.  The only reason i managed second life as well as i was is I had a good graphics card!  My processor speed SUCKED.


Now, for info on this color! Blue Bell. I like the flower, its pretty and its a pretty color.  The crayon itself is, like Almond, another color only found in the big 120 box of crayons and was introduced in 1998. I really need to get myself one of those huge boxes for uh...research. Checking the screen color against the crayon!  Yes..thats why I need it *shifty look and hides her crayon hoard*

I wanted a fun outfit for the color, and found the jeans in my inventory, there is a band on the bell bottoms that change fabrics. The shirt I picked up for this color as I could find NOTHING that fit. And it was a tricky color as well..did i look in my blues or purples?

Turlock will be joining me for Mountain Meadow, hes got some silly idea planned for it.  But it should be cute.
Posted by Softpaw Sommer at 5:23 AM No comments:

My computer has BSOD and we can not revive it just yet. All my crayon files are on it. I REALLY hope I haven't lost years worth of files on that harddrive.

This means till I can get ti fixed and access my files I'm going to have to put the challenge on hold. Feel free to post your bluebell though! Ambrose has my color chart so If I can get ahold of him I can post next weeks colors. I just can't post my own takes on them.
Posted by Softpaw Sommer at 2:44 AM 2 comments:

Yesterday was my Birthday, so for this weeks color I wanted it to be something I LOVE, and so I chose Rose Dust. Roses are my second favorite flower, my first is Columbines. And my favorite color is pink. So I chose a rosy pink shade for this week.

The Rose Dust Crayon came out in 1990 as part of the Silver Swirls set. All these crayons have a silvery metallic sheen to them. I had/have a box and they where fun to work with. If you took a tissue or piece of fabric and buffed the crayon on the paper it made it shimmer even more.

I've had this stunning gown by Kunglers for a while and have been waiting for a good chance to wear it. I love how silky it looks. I added a lovely necklace by Earthstone to complete the look.

For the sim, I wanted a beautiful one to explore. I have said in the past how much I love and adore Andrek Lowell's forest builds. I found one I had not been to yet. Called Brookes Forest, It's on Linden land, not a full sim. But still lovely. 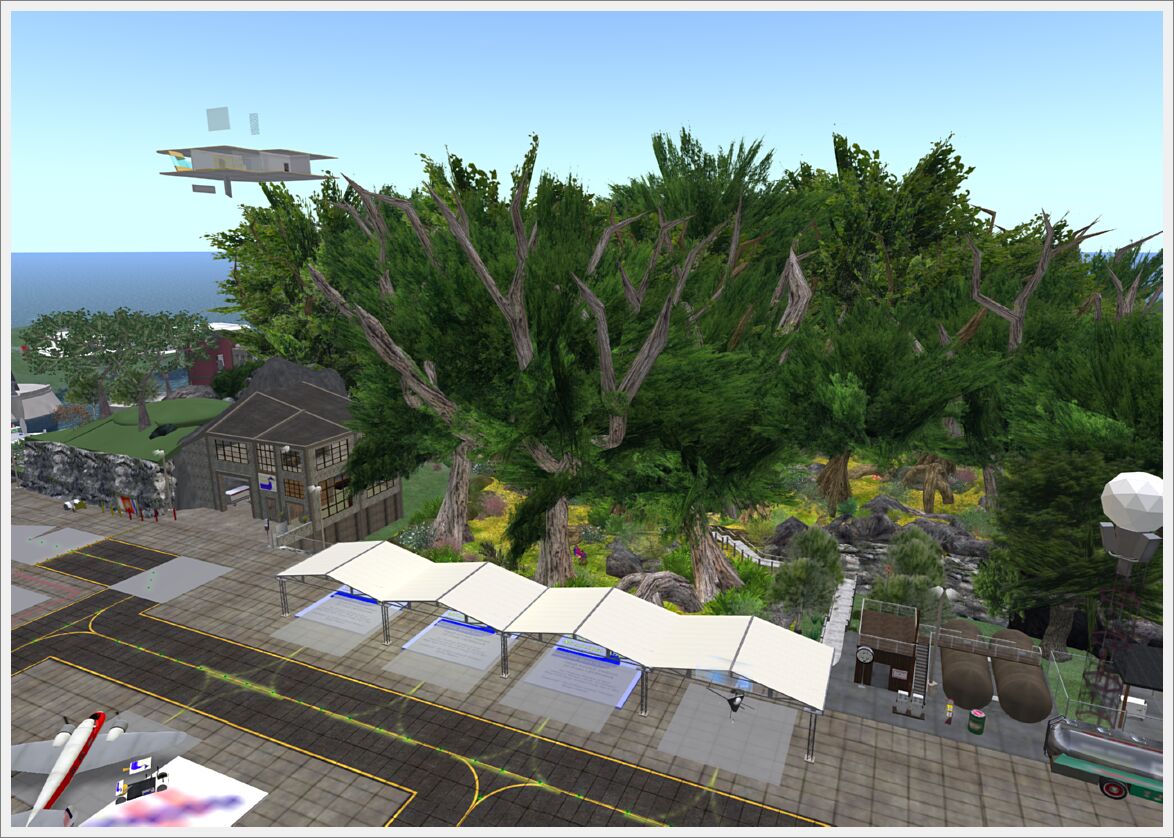 
After waiting on things to rez I set to exploring. I was not disappointed with his build at all. There are even two of Andrek's famous quests. I'm standing in front of one in the top photo. Sadly, I could not finish them as the land owner has it set to no build, meaning you can't rez the quest items to finish the quest. Pitty. The prizes are often very cute. When I noticed that it was no build I stopped looking for the items. 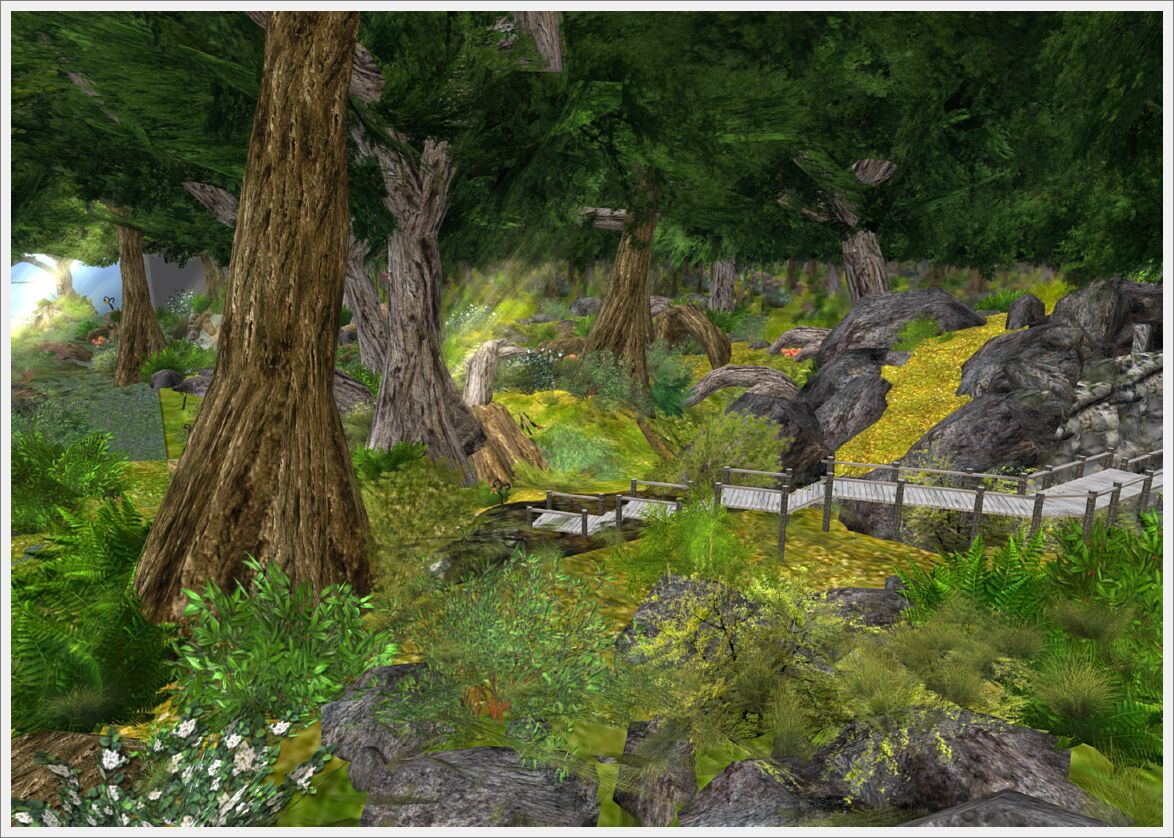 
The build has many snuggle and social areas scattered about to use. and some very lovely trees. Two caves and a gypsy wagon! And if you get bored of it, its between a water area with boats and an airport! Do go check it out! 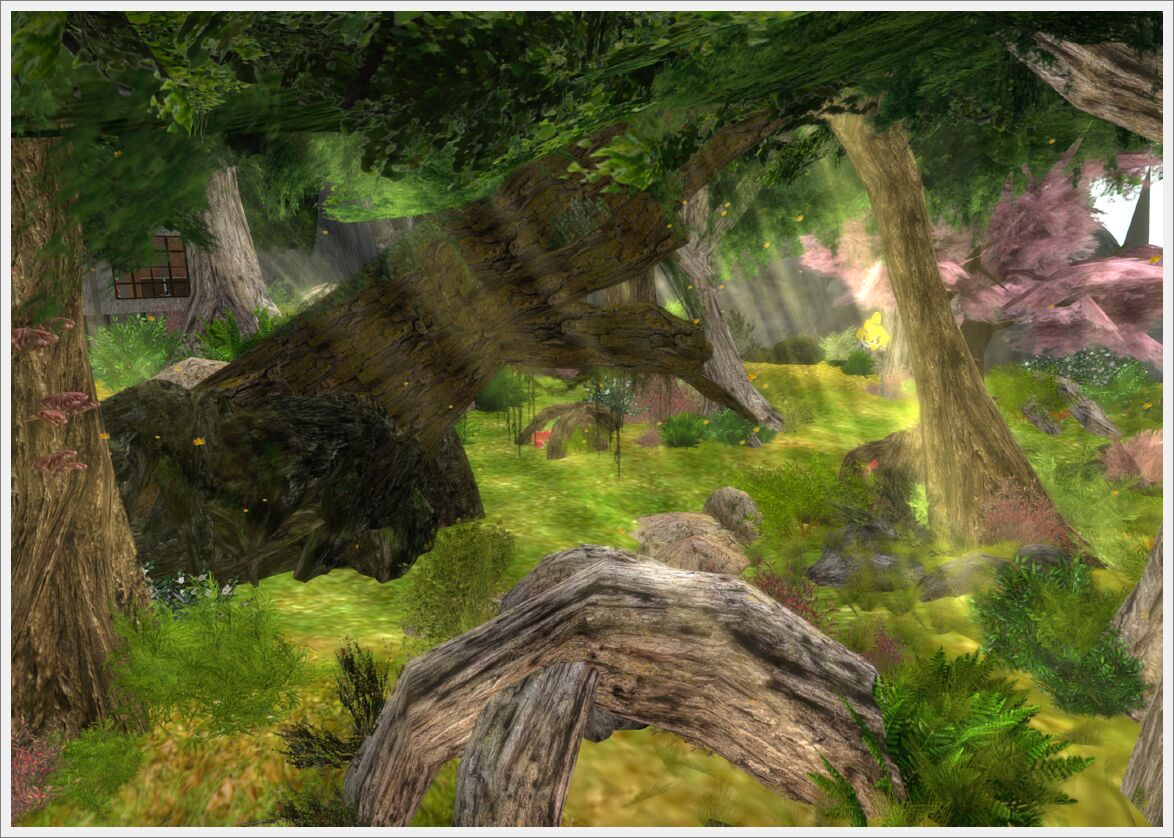 
All of my photos are at this link.

I gave Ambrose my list of colors for the year and he's possibly going to start making an item with it for his bakery. I hope he does! It should be most interesting to see what he comes up with!
Posted by Softpaw Sommer at 1:51 AM 1 comment:

Lets get this started fully!!

I wish I could figure out how to get blogger to NOT add those white borders around photos! Argh!

The Color Almond is found only in the big 120 box of crayons. It was introduced in 1998 and can still be bought today. It is of course named for the Nut, which is my favorite nut..mm..almonds! Which is why I chose this one! And it's first as the list of crayons I found was alphabetical and I didn't see a reason to change this one from the starting color. PLUS, its a pale neutral which are always a challenge for me.

The outfit I found is a lovely mesh sheath dress by Boom. A brand that is new to me, but I liked the lace detail on the front quite a lot.

The sim I chose to explore in this color is a LEA art sim by Rebeca Bashly Called The Tower. I believe it will be taken down soon, if it has not already been. So go quickly to check it out! I found it very thought provoking and moving. 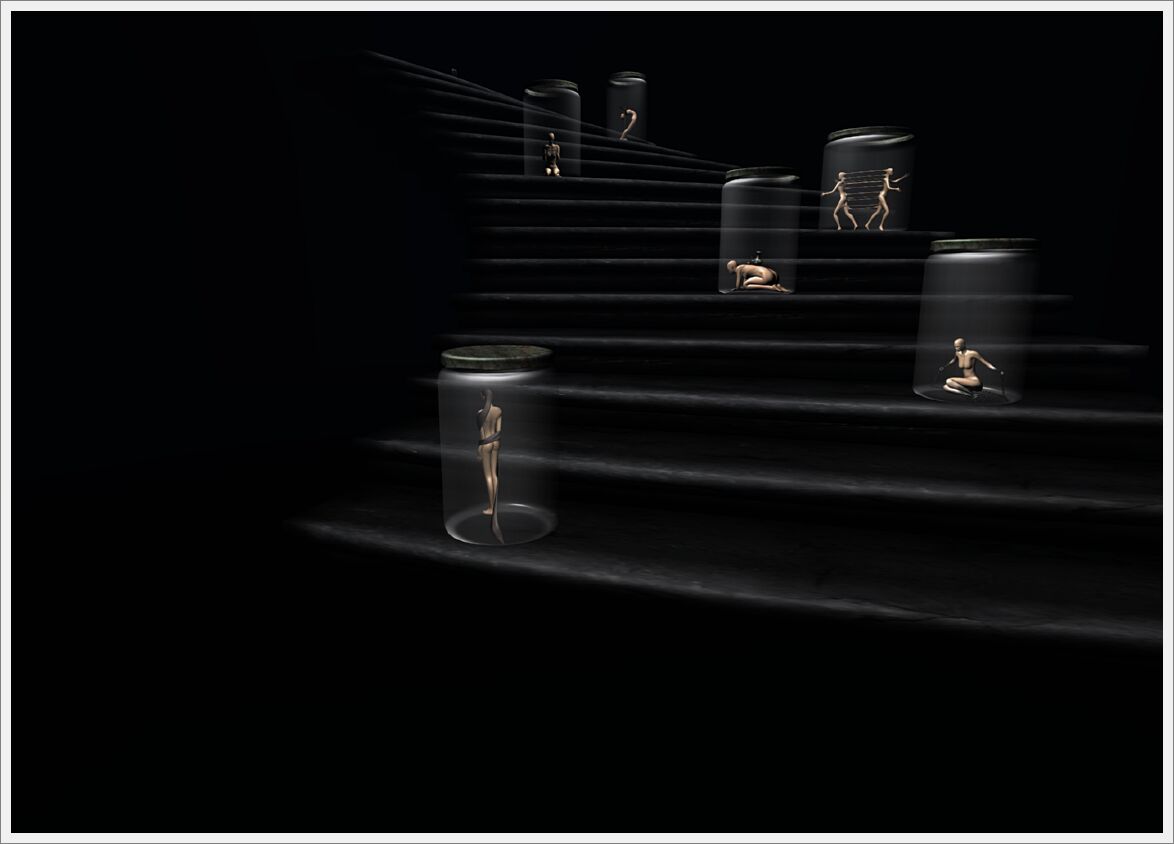 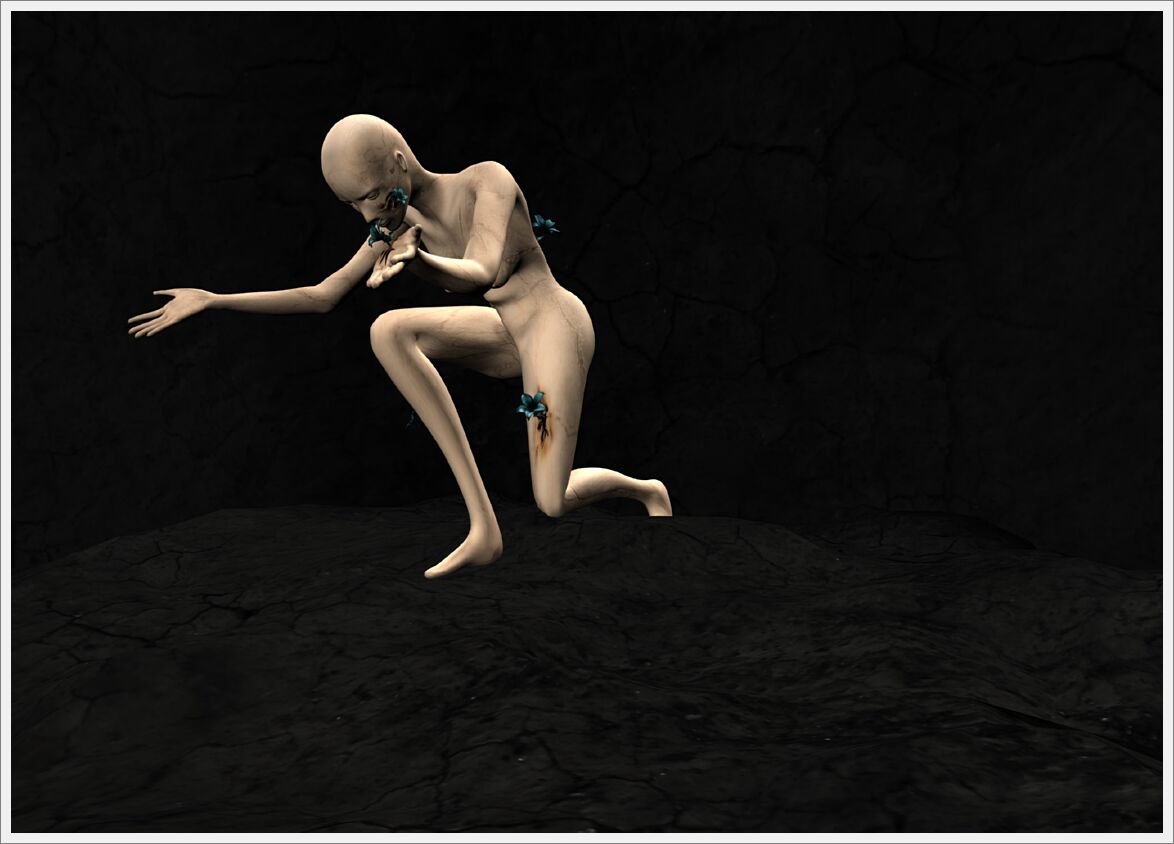 
All of my photos of the Tower can be found here.

Looking forwards to seeing if anyone is doing this challenge with me!! I'd still do it no matter what, Luna's challenge gave me a reason to blog every week and I want to keep that up.
Posted by Softpaw Sommer at 12:03 AM 2 comments: 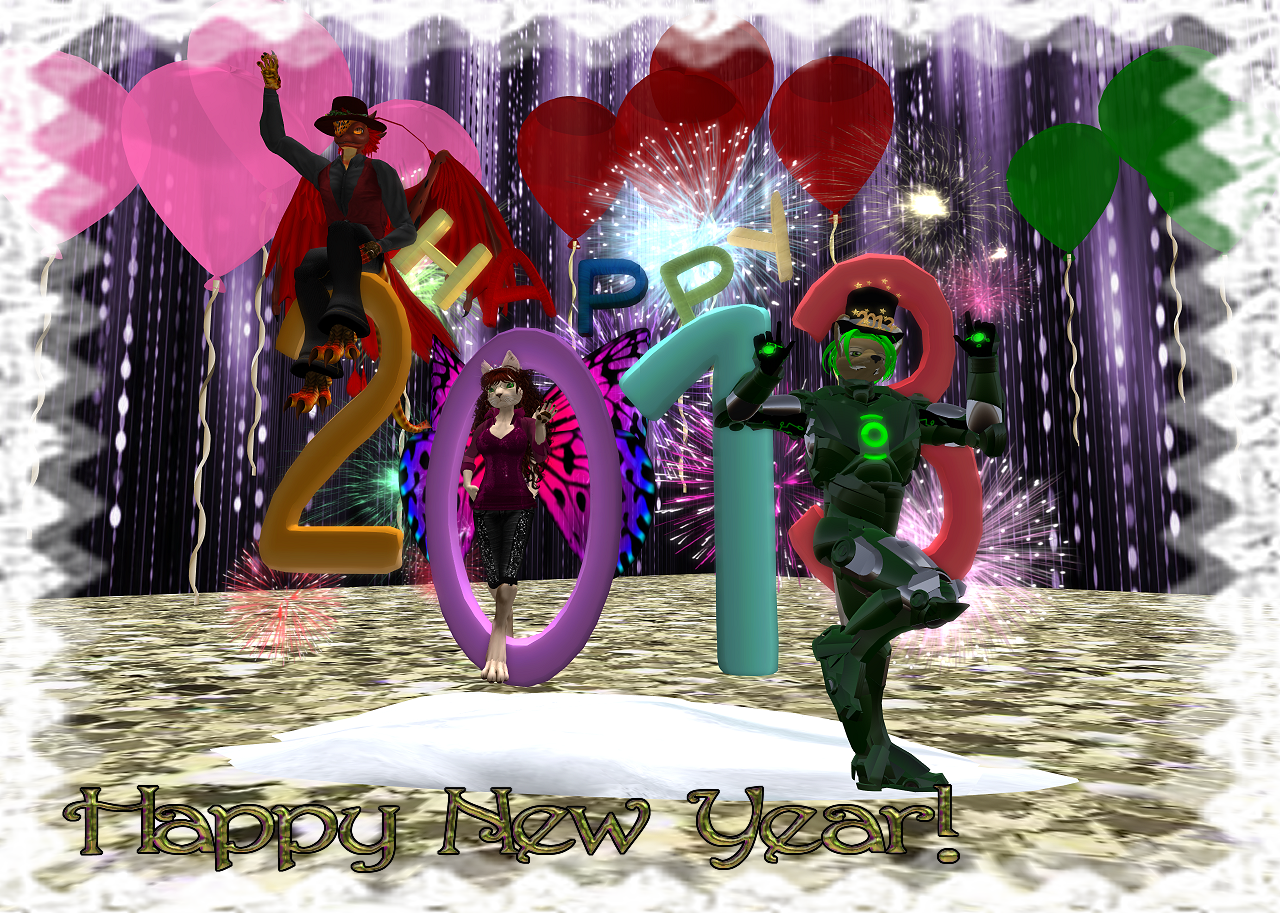 Posted by Softpaw Sommer at 2:56 AM No comments: